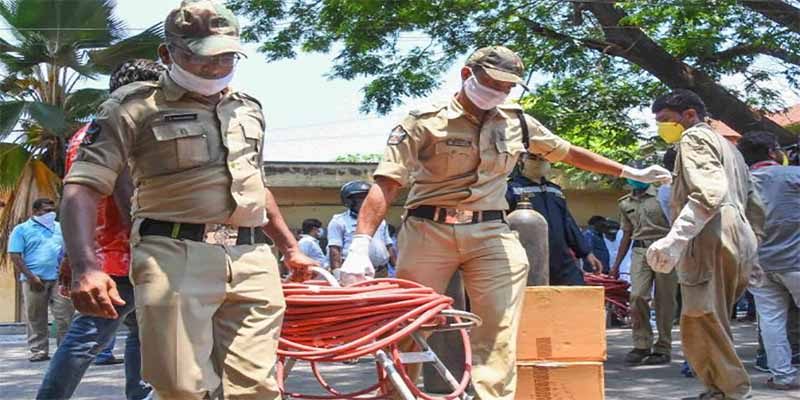 Major gas leak in Visakhapatnam is adding to the crisis in India with the ongoing coronavirus pandemic. At least 12 persons, including a six-year-old girl, have died and hundreds were admitted to hospital following the leakage of a poisonous gas from a chemical plant in Visakhapatnam, Andhra Pradesh, this morning. The gas leak occurred at the LG Polymers Plant between 2.30 am and 3 am. The toxic gas spread over a radius of three km, affecting at least five villages, including R.R. Venkatapuram, Padmapuram, B.C. Colony and Kamparapalem. Some reports said around 800 people were taken to hospitals. According to PTI, nearly 300 were undergoing treatment, with 20 of them on ventilator support.

We have a live page tracking the developments on this story, as well as some explainers. Styrene, the gas that leaked from the plant, is a poisonous, inflammable gas used in the plastics industry to make products such as disposable cups and containers. When inhaled, it can affect the central nervous system, and cause nauseas, headache, loss of balance, and a burning sensation in the eyes. However, so far, no studies have reported deaths from short-term exposure to styrene gas. Hence, it is not clear if the deaths were caused by styrene alone or a combination of chemicals.

The management of a chemical plant near Visakhapatnam where a gas leak left 11 people dead and hundreds hospitalised on Thursday was booked on charges including culpable homicide not amounting to murder and causing death by negligence police said.

The National Disaster Management Authority (NDMA) estimates that at least a thousand people expanding across five villages have been affected by the Styrene gas leak from LG Polymers’ chemical plant in Vizag.

In a related development, the Andhra Pradesh high court took cognisance of the styrene gas leak and issued notices to the state and the Central governments, while observing how such a plant was allowed to operate in the midst of human habitations.

Taking up the matter on its own (suo motu), the court also appointed the AP high court Bar Association president as amicus curiae in the case and posted it for further hearing next week. “The suo moto case should not be seen as something against the government. We have taken cognisance of it because it involved human lives,” the court said.

Earlier, during his visit to Visakhapatnam to review the aftermath of the tragedy, Chief Minister Y S Jagan Mohan Reddy spoke to the senior officials of LG Polymers Ltd and obtained their version on the accident, sources said.