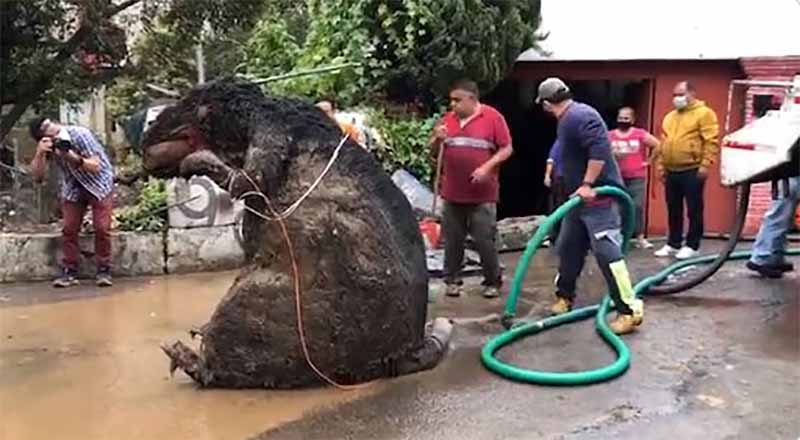 Workers clearing the underground drainage system in Mexico City were shocked to discover a gigantic rat there. According to a report, crews were working hard to remove 22 tons of litter from the city’s sewage tunnels when they came across the huge, life-like ‘rat’.

It turned out to be a Halloween prop that had ended up underground.

In a now-viral video posted to Facebook, the giant rat can be seen dwarfing the humans around it. A worker can be seen hosing off the incredibly realistic rat sculpture, which shows the rodent in a hunched-over position. Witnesses who saw the incident unfold reportedly expressed surprise that such a huge creature had somehow managed to end up in the labyrinth of underground tunnels. Others commented on its naturalistic appearance. Since being posted on Saturday, the video has garnered over 5 lakh views and a ton of reactions.

The incident made way to the news and pictures of the giant rat were widely circulated on social media. Since then, a woman has come forward to claim ownership of the prop, reports The New York Post. Evelin Lopez claims that she made the rat from scratch years ago and intended it to be a Halloween decoration.

She said the rat disappeared after heavy rains carried it away.

Ms Lopez said that she never received help when she asked for assistance to search the drains. Now that she has the rat prop back, she is not sure if she will keep it.