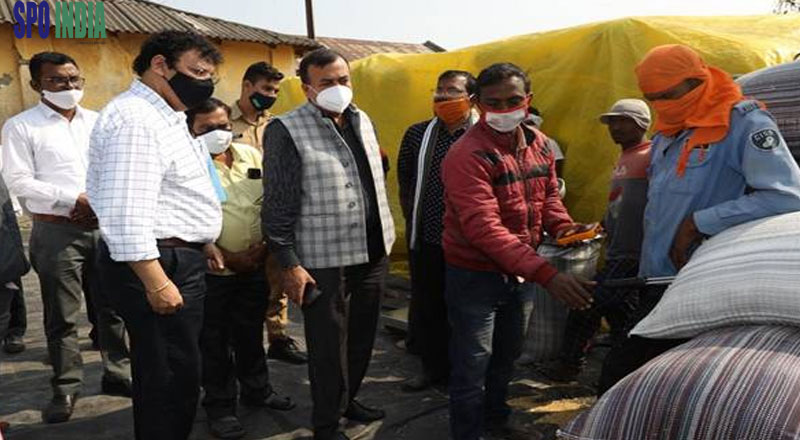 Senior Officers of Food Corporation of India (FCI), Maharashtra State Government, and procuring agencies accompanied him during this visit. Although, he was satisfied with the procurement operations but advised the State Government Authorities to improve upon the infrastructure at the procurement centers. He also interacted with the farmers at the center and encouraged them to avail the benefits of various schemes of the Centre. It was also informed that a new testing method of Rice has been introduced by the GoI to know the age of the Rice which would encourage Paddy procurement and help the farmers.

Following which, the Secretary, Food visited a Fair Price Shop (FPS) at Kardha where he interacted with FPS owner and some PDS beneficiaries. He expressed satisfaction over the system of issuing Ration under NFSA (National Food Security Act) and PM-GKAY (Pradhan Mantri Garib Kalyan Anna Yojana).

The Secretary Food emphasized to give impetus on setting up Fortified Rice manufacturing plants especially in and around Paddy Procuring Districts of Gondia, Bhandara, Chandrapur since Govt. of India has chalked out a plan for issuing Fortified Rice through PDS in future as announced by Hon’ble Prime Minister.

He emphasized on promoting solvent extraction plants for manufacturing Rice Bran Oil in the procuring Districts. He advised Govt. of Maharashtra to work on crop diversification especially the production of Millets as the year 2023 is being declared as the International Year of Millets by the Food and Agriculture Organization of the United Nations. He further emphasized putting up grain-based distilleries for the production of ethanol and thereby promoting Maize cultivation.

Shri M.S.Sarang, GM, FCI Maharashtra briefed about the FCI operations in the State and various issues related to procurement, storage and distribution of food grains in the State were discussed.