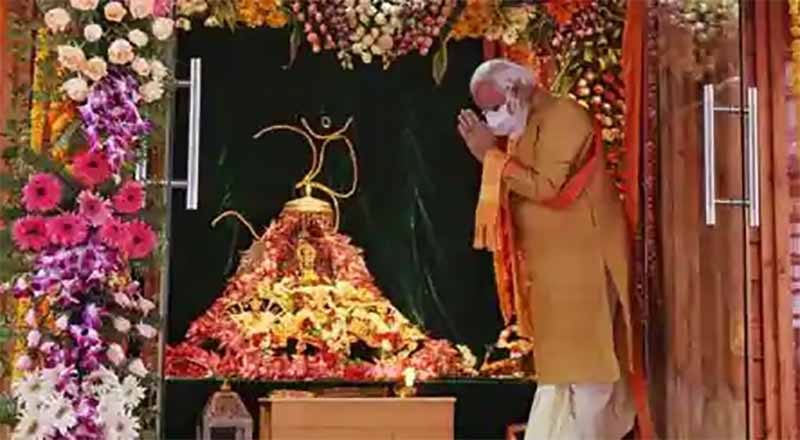 Prime Minister Narendra Modi offered prayers and laid the foundation stone for a grand temple at the site believed to be the birthplace of Lord Ram in Uttar Pradesh’s Ayodhya. The groundbreaking ceremony marks the formal launch of the temple’s construction promised by the ruling BJP in its manifesto nearly three decades earlier.

Modi symbolically laid a 40-kilogram (88 pounds) silver brick foundation stone, to formally start the construction of a temple dedicated to the Hindu deity Ram in the city of Ayodhya in the northern Indian state of Uttar Pradesh. Modi also released a postage stamp on the Ram Janmabhoomi temple.

“A grand temple will now be built for our Ram Lalla who had been staying in a tent for decades. Today, Ram janmbhoomi breaks free of the cycle of breaking and getting built again – that had been going on for centuries,” PM Modi said at the event who expressed gratitude to all the people who had made huge sacrifices for the temple moment.

“India is creating a golden chapter in Ayodhya. The wait of centuries ends today,” PM Modi said in his televised address at the event.

Only 175 guests were invited. UP CM Yogi Adityanath, Mohan Bhagwat, the chief of the ruling BJP’s ideological fountainhead Rashtriya Swayamsevak Sangh, UP Governor Anandiben Patel were among the other present.

The temple construction has been made possible because of a Supreme Court verdict nine months ago that ended a legal battle lasting decades and awarded the site to Hindus. The Muslim community has been given a 5-acre plot at another location to build a new mosque to make up for the 500-year-old Babri Masjid demolished by a mob in 1992

On the special occasion of the ‘Bhumi Pujan’ of Ram Mandir, Union Law Minister Ravi Shankar Prasad, who has been a long-standing lawyer of the Ram Lalla deity, on shared an original document of the Constitution.

He said, “Original document of the Constitution of India has a beautiful sketch of Lord Ram, Mata Sita and Laxman returning to Ayodhya after defeating Ravana. This is available at the beginning of the chapter related to Fundamental Rights. I felt like sharing this with you all,” said the minister. The Union Minister also termed the day as a day of India’s self respect.