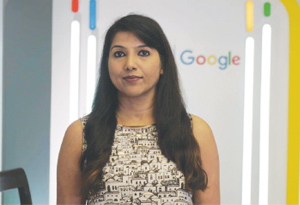 Google is been deeply committed in partnering with small businesses and addressing their issues by enabling them to use the power of technology to grow. Throwing more light on this, Shalini Girish, Director – Google Marketing Solutions, Google India talks about the various initiatives that it has started to empower these businesses in the country –

India has the second largest Internet user base in the world with 400 million connected users. The country has an incredibly healthy and growing digital ecosystem with huge potential for scale as India is expected to hit 650 million Internet users by 2020. Smartphone adoption in India has also grown rapidly reaching over 300 million Indians.

“Over the last year, we have seen significant changes in our broadband infrastructure – both wireless and wifi – leading to unprecedented growth in internet consumption,” points out Shalini Girish, Director – Google Marketing Solutions, Google India. “The growth brings with it huge opportunities for the start-ups to get onto the digital platform and reach to a larger target audience across the country.”

Google’s mission in India is aligned with the vision of the Prime Minister Narendra Modi of “Digitizing India” which aims to build an inclusive internet – for everyone, whether it’s a small sari shop owner in Chandni Chowk or a web or app developer working from a room in their house. But across all these initiatives, Google’s underlying objective is to overcome barriers that hinder Indians from getting the full value of internet.

In a joint study done by Google with KPMG to find the impact of internet and digitization on SMBs in India, it found out that 68% of the 51m Indian SMBs are still offline. It also reiterated that digitally engaged SMBs grow twice as fast compared to offline SMBs. The report also revealed that, digitally engaged businesses are able to grow their customer base significantly with 52% catering to customers beyond their home city versus only 29% offline SMBs. Highlighting the macro-economic impact of the internet, the research found that rising penetration and greater uptake for digital by SMBs could help increase their contribution to India’s GDP by 10 percentage points, taking it up to 46-48% by 2020. The report cites the lack of understanding of the benefits of digital technologies and technical skills as the essential reasons for being offline.

“One of the main reasons for only 32% of small businesses in India leveraging the power of digital to reap the benefits of the digital economy is simply because there is a lack of understanding of the benefits of digital technologies and technical skills amongst the start-ups of the country,” says Shalini. “This is why Google is investing in ecosystem initiatives of training SMBs through “Digital Unlocked” campaign and helping start-ups to solve for the needs of Indian users by providing them the best of Google tools, platform and mentoring.”

However access to the internet is at the core of this digital growth. Google understands that creating abundant access to the internet is important part of bringing the Internet alive for lndia. Towards this goal Google has partnered with RailTel and Indian Railways to create an unparalleled public WiFi infrastructure and experience for users across 400 Railway Stations.

To implement this project, Google has developed Google Station a technology stack which enables any venue owner to deploy public WiFi services. In many ways, this project has revived the importance of investing in high speed public WiFi infrastructure in the country and is a shining example of what can be accomplished with public private partnerships to reach the digital India vision. “Most importantly, today, our RailTel project is live at 150 stations and 6.5 million Indians use the service every month,” says an exuberant Shalini.