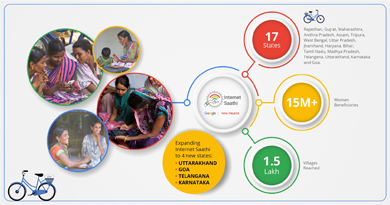 In its mission to bridge the digital gender divide in rural India and empower women through digital literacy, Google India and Tata Trusts announced reaching the halfway mark, with 150,000 villages, under its Internet Saathi program. The program has contributed towards bridging the digital gender divide in rural India [female to male ratio from 1 in 10 in 2015 to 3 in 10 in 2017*], and has benefited over 15M women in 13 states, the program has expanded to cover four new states — Goa, Karnataka, Uttarakhand and Telangana.

The ‘Internet Saathi’ programme focuses on educating women to use the internet, who then impart training to other women in their community and neighboring villages. The program has motivated many enterprising women, who are now using the internet, to find new opportunities — be it Vandana Potdar from Karandi, Pune who helped start a community owned Potato chips business or Shital from Sangli, Maharashtra, who helped her son prepare and clear the Science Olympiad exam, by finding study modules on the Internet or Padmavati who set-up an lemongrass oil production unit in Guntur and learnt the various manufacturing techniques using the internet, or hundreds and thousands of other women.

The program will cover over 10,500 villages, spread across the four new states — Goa, Karnataka, Uttarakhand and Telangana, and will train around 1000 Saathis.

Seeing success stories of these women, Ganga, an Internet Saathi from Vallabhipur, Telangana said, “I am very excited to be teaching my fellow village women about the wonders of the Internet. I have found the convenience of online payments through various apps and feel it can be beneficial for others too.”

Raman Kalyanakrishnan, Head – Strategy, Tata Trusts, said, “We are really proud of this achievement. This wouldn’t have been possible without the most important stakeholders, the women themselves – the vehicles of transformation. They have shown a great amount of enthusiasm and keenness to learn, despite many challenges. Keeping the momentum of this initiative, we will be continuing our outreach in the next 150,000 villages to improve digital literacy and create sustainable livelihood opportunities for women in rural India.”

Launched as a pilot in 2015 along with Tata Trusts, the program has successfully reached the length and breadth of the country today, and has a network of 48000 Internet Saathis, who are spread across the villages of Rajasthan, Gujarat, Jharkhand, Andhra Pradesh, Uttar Pradesh, Assam, West Bengal, Tripura, Maharashtra and Madhya Pradesh, Bihar, Haryana, Tamil Nadu, Uttarakhand, Goa, Karnataka, and Telangana.