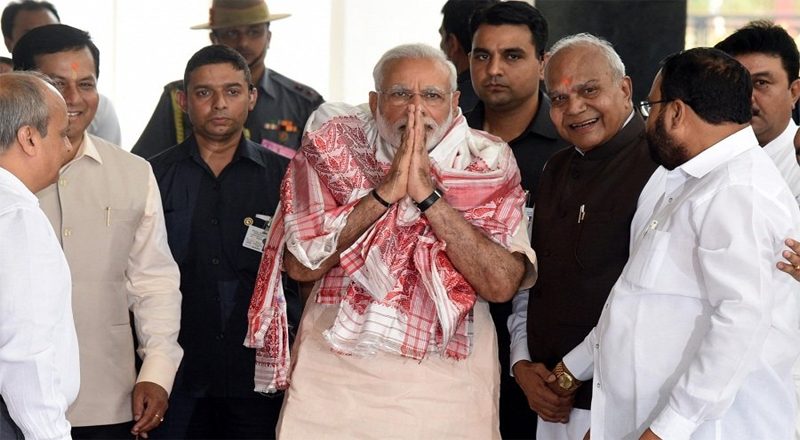 Prime Minister Narendra Modi on Friday visited Assam to celebrate the signing of Bodo Pact. During his speech, he highlighted the importance of the Bodo agreement and said that no citizen will die of violence anymore in the North East and that the road for development has opened in the region.

“The road for permanent peace has opened up only due to your help and willpower. This is a new opportunity and a new dawn for Assam and the entire Northeast to welcome the 21st century,” he said addressing a gathering here.

“We won’t allow the darkness of terrorism to return here. No citizen will die of violence anymore in this region. Mothers whose children have returned from the wilderness are blessing me today.”

He said that the Bodo Accord was a reflection of ‘Sabka Saath, Sabka Vikas, Sabka Vishwas’ and added that the Peace Accord would benefit the entire people of the region.

He also welcomed all those who were part of the Bodoland movement and joined the mainstream.

While stating reply to Motion of Thanks to President’s address in Lok Sabha, the PM said the people of the country were not ready to wait.  “They want Speed and Scale, Determination and Decisiveness, Sensitivity and Solution,” he said.

Speaking further on Ayodhya verdict and construction on Shri Ram Modi announced setting up of ‘Shri Ram Janma Bhoomi Tirtha Kshetra’ trust, which will oversee the construction of Ram Temple in Ayodhya. He said that the decision was in line with the historic verdict of the Hon’ble Supreme Court. He also announced, “Let us all work together in building a grand Ram Mandir”.

During his reply in Rajya Sabha to the Motion of Thanks to the President’s address, PM Modi said that in the last five years Government had brought new thoughts and new approach to the governance. Emphasizing on growth of Tier 2 and 3 cities, PM Modi stated that the most aspirational youth of the country lives in the small towns which were the foundation of the New India.