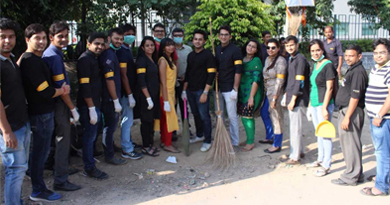 Inspired by PM Modi’s Clean India Mission, ShepHertz Technologies, a Gurgaon based startup offering omnichannel enterprise platform for agile & incremental digital transformation has initiated a campaign to clean the area where most office goers of Spaze I-Tech Park, Sohna Road, eat from the street side vendors.

As a contribution to making India clean, some of the employees from ShepHertz initiated the campaign and collaborated with some of the Spaze employees and helpers to kick-start the activity. “Some of the street vendors here are open 24×7 and the area is always dusty and full of damaged polybags and other harmful stuff. So, we decided to go out, clean the area and educate the vendors to maintain hygiene as most of the people who work in Spaze I-Tech Park come here during breaks to eat street food,” said Daljeet Mehta, EVP Sales & Alliances, ShepHertz, who came out to contribute in the campaign.

What started as a short activity soon turned into a mass movement where people passing by joined the campaign and helped the entire ShepHertz and Spaze group in cleaning the street food area. Team, then, used chalk powder to draw assigned areas to each vendor and educated them to own the responsibility of cleaning their assigned area themselves.

“There have been numerous wars that we have fought and won, but the real war now is against dirt and garbage. When the entire nation is getting more and more aware of clean India mission then why should we, the educated, stay behind? We realized that the onus to clean area around us is on us and rather than sitting & cribbing about it, we decided to take charge and initiate the cleanliness ourselves,” said Brig. Manoranjan Singh, Head Functional Operations at ShepHertz.

Most interesting part about the whole campaign was that all the employees of ShepHertz did not seem hesitant in picking up dust, plastic wrappers, cigarette buds, used paper plates, empty snack packets and even shabby clothes lying on the ground. With help from Spaze employees, they packed what seem like four large garbage bags with piled up dirt. One should take a leaf out of this campaign to contribute in clean India mission, this is the only way we can pray and wish for our country to be clean.