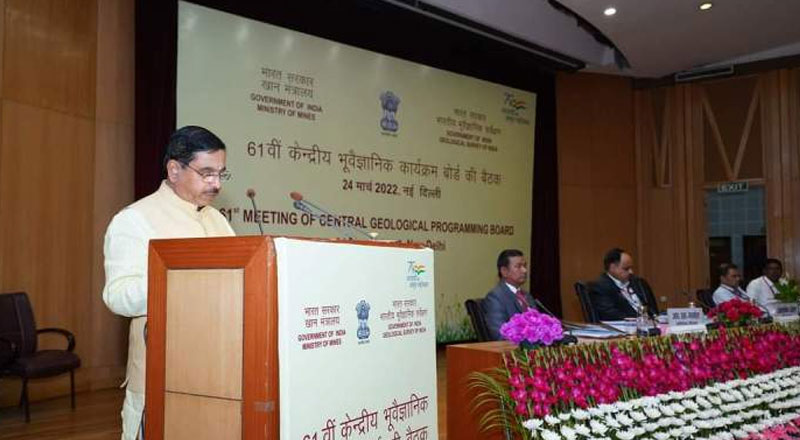 Union Minister of Coal, Mines and Parliamentary Affairs Shri Pralhad Joshi urged the Geological Survey of India (GSI) to reduce the time taken in completing field survey and submission of reports on potential mineral resource deposits in the country. The Minister asked GSI to complete survey and preparation of report in an year’s time using latest technologies.

Addressing the 61st meeting of Central Geological Programming Board (CGPB) here today Shri Joshi said that GSI having a legacy of 175 years of existence as a prestigious institution is expected to contribute to the recent efforts of the Ministry of Mines to attain self-sufficiency in mineral resources. Shri Joshi said that efforts of GSI and the private sector can contribute considerably towards this. The Minister pointed out that India is having vast deposits of minerals. However, we are importing different types of minerals in big quantities. This is true in the case of fertilizers also, the Minister added.

Shri Joshi called upon the scientists of GSI to analyse global trends in preparing potential mineral deposit reports. Stressing upon the importance of latest technology in mining exploration, Shri Joshi promised all kinds of assistance to GSI from the Ministry of Mines.

Earlier, addressing the meeting during the concluding session Secretary, Ministry of Mines Shri Alok Tondon said that a number of  new projects are being taken up by GSI based on the request from state governments. He said that India is at par with any other rich nation as far as mineral resources are concerned.

Senior officers of Ministry of Mines, Geological Survey of India (GSI), members from other Central Ministries, State Directorates of Mining and Geology, representatives from private mining industry, PSUs, Mining associations and other stakeholders attended the meeting.

During the year 2022-23, out of 983 projects, GSI will be taking up 32 programmes at the request of State Governments; 12 programmes in collaboration with national institutes, organisations and IITs. Four  sponsored training courses will be taken up with ISRO and MoEA and there will be 20 sponsored geotechnical projects with various stakeholders like NWDA, CWC, NHPC, Indian Railways, State Irrigation Departments, BRO etc. The finalization of programs will take into consideration the priorities and importance set forth by the Government through its various policy decisions and also on the basis of the recommendations of CGPB Committees’ and State Geological Programming Board (SGPB) meetings.

The Central Geological Programming Board (CGPB) is  the apex body at the national level to coordinate and prioritize the geoscientific activities undertaken by various organizations/agencies in the country, especially in the field of mineral exploration. It is the paramount mechanism wherein the detailed program of geoscience investigation, by central and state agencies are discussed in a coordinated and collaborative approach for finalizing comprehensive exploration strategy of the country with optimum use of available resources.