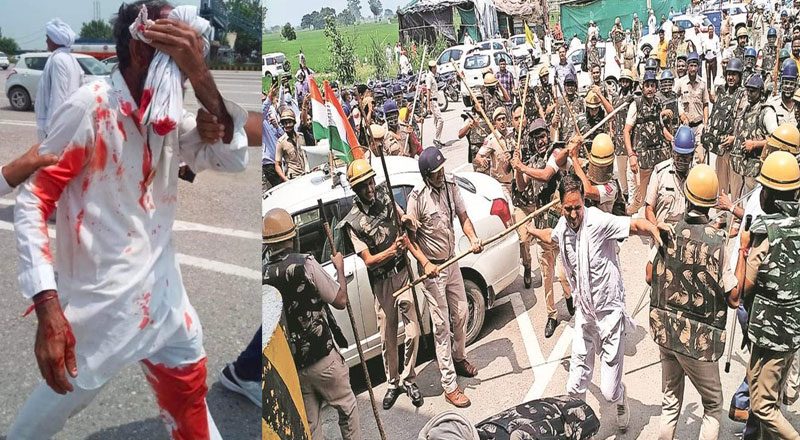 A shocking video is showing an IAS officer instructing policemen to beat protesting farmers if they breach police barricades in Haryana’s Karnal. Sub-Divisional Magistrate Ayush Sinha is heard saying in the now-viral video,

“Sar phod dena (Break their heads). Just hit them with your batons…no directions are needed.” Several farmers were later injured as police baton-charged them in Karnal.

It is now making rounds on social media. He also tells the police to take action against those who even try to cross the line without any orders. Now, the question arises that whether the government allows this type of action to be taken against anyone in the democratic country?

Ayush Sinha said on his defence said, he was telling police officials in a viral video to ‘break heads’ of protesting farmers, said that the video was “doctored”. “Only a selected portion about the lathi-charge was made viral on social media,” said Sinha. He said he told policemen to give warnings to protesters, use water cannons and tear gas, before resorting to lathi-charge.

The lathicharge that took place was at Bastara toll plaza where another SDM, not I, was deployed. My location, the point where I was deputed, was 10-15 km from the spot where the actual lathicharge took place. Nothing happened at my naka. The police personnel, who were briefed by me, did not do anything. None of the protesters reached there and nothing happened at my naka,” Sinha said.

Congress’ Rahul Gandhi hit out at police for lathi-charging protesting farmers in Haryana’s Karnal district on Saturday. Sharing a picture of a farmer who was injured in the protest, Gandhi tweeted, “Again…blood of farmers is shed…India bows its head in shame.” The farmers were protesting against a BJP meeting, attended by Haryana CM ML Khattar, on a forthcoming municipal election.

Congress spokesperson Randeep Surjewala said that the Khattar-led government was treating farmers like General Reginald Dyer (behind the Jallianwala Bagh massacre), refusing to allow them to protest peacefully against controversial farm laws.

Punjab CM Captain Amarinder Singh too slammed his Haryana counterpart for “unleashing brazen brutality of the police on the peacefully protesting farmers, many of whom were injured in the lathi-charge,” news agency ANI reported.

Speaking to NDTV, Malik also demanded the removal of a sub-divisional magistrate who was caught on video instructing the police to “crack the heads” of the protesting farmers. Malik said that the government was supporting him and that he was not fit for the role of a district official.

In his interview with NDTV, referring to self as “a farmer’s son,” Malik stated that Khattar should apologise to the farmers for using violence against them.

Haryana Deputy CM Dushyant Chautala on Sunday condemned the remarks of IAS officer Ayush Sinha who was seen instructing police officials to ‘break heads’ of protesting farmers who breach police barricades. “The use of such kind of words…against farmers is condemnable. Definitely, action will be taken against him,” said Chautala. A video of Sinha briefing police in Karnal went viral.