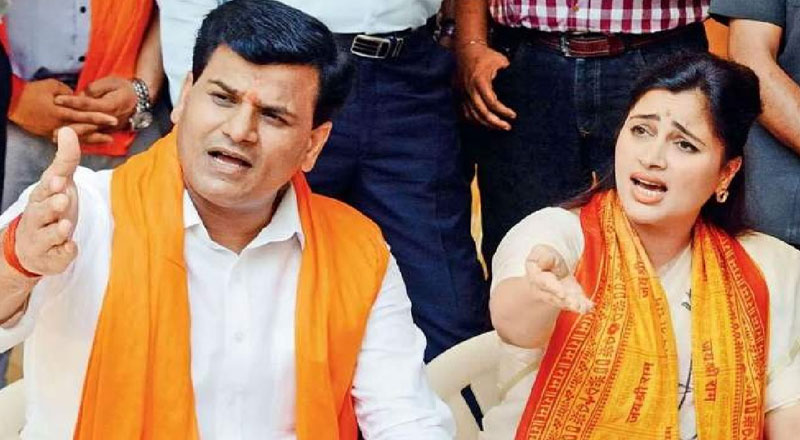 Maharashtra MP Navneet Rana and her husband MLA Ravi Rana were granted bail in a sedition case lodged against them for allegedly “trying to incite communal violence by reciting Hanuman Chalisa in front of CM Uddhav Thackeray’s house”. A detailed copy of the bail court’s order was made available on Friday. Here’s what it said.

A special Mumbai court said in its order on Wednesday that Maharashtra MP Navneet Rana and her husband MLA Ravi Rana “undoubtedly crossed the line of freedom of speech” guaranteed under the Constitution”. The order, however, said that the mere expression of derogatory or objectionable words may not be a sufficient ground for invoking the charge of sedition against them.

1The court noted that the Ranas had come to Mumbai from Amravati to recite Hanuman Chalisa outside Maharashtra Chief Minister Uddhav Thackeray’s residence. Special judge Rahul Rokde said, “It is pertinent to note that on perusal of the FIR, it is not the case of the prosecution that the said announcement was made with an intention to incite people to create disorder by acts of violence.”

2“The announcement does not, in any manner, have the tendency of subverting the government by violent means, nor does the same have the effect of creating hatred, disaffection or contempt for the government,” the order said.

3“On perusal of the transcript of interviews allegedly made by the Ranas are concerned. Prima facie, it appears that they have used certain expressions and sentences against the Chief Minister, which are extremely objectionable,” the order said.

4“It is to be noted that political leaders play an important role in facilitating peace and tranquillity. Their vitality is appreciated due to the fact that they have followers…Therefore, politicians and other public figures have greater responsibility. The impact of political speech is also greater because politicians are in a position of authority,” the order said.

5The order also noted: “Undoubtedly, Ranas have crossed the lines of freedom of speech and expression guaranteed under the Constitution of India. However, a mere expression of derogatory or objectionable words, may not be a sufficient ground for invoking the provisions contained in section 124A (sedition) of IPC. The said provisions would apply only when the written and spoken words have the tendency or intention of creating disorder or disturbance of public peace by resort to violence. Therefore, though the statements and acts of Ranas are blameworthy, the same cannot be stretched too far to bring within the ambit of section 124A of IPC.”

6Special Judge Rahul Rokde said, “It may be noted that neither Ranas called anyone to bear arms nor any violence was incited in general as a result of the speech delivered by them. In this view of the matter, I am of the considered view that prima facie, decisive ingredients of Section 124A of the IPC are not made out at this stage.”

7The judge also noted the argument made by advocate Abaad Ponda that the prosecution did not raise any grievance about the denial of police custody of the Ranas.8Judge Rokde said, “Having regard to the entire gamut of the circumstances, I am of the considered view that this is a fit case to enlarge the Ranas on bail. The apprehension of the prosecution can be addressed by imposing stringent conditions on them.”