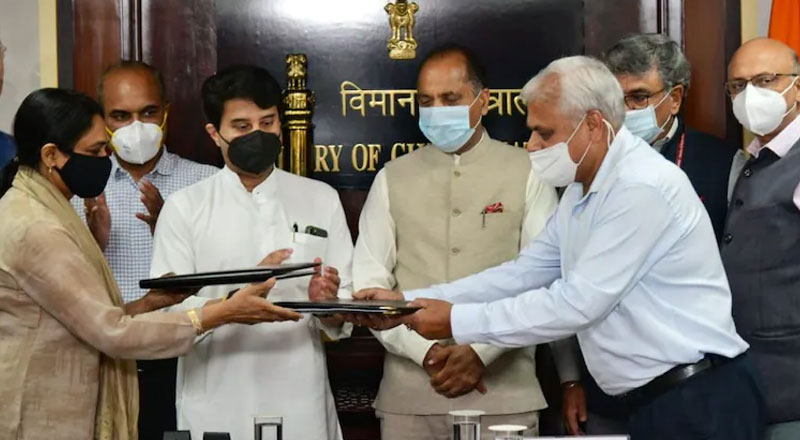 In a big boost to Himachal Pradesh’s air connectivity and tourism sector, a joint venture agreement for the development of Greenfield Airport at Nagchala in Mandi was signed on Monday. The agreement was signed in the presence of Chief Minister Jai Ram Thakur and Union minister for civil aviation Jyotiraditya M Scindia.

Chief Minister Jai Ram Thakur in New Delhi.The agreement will pave the way for development of the airport in Mandi, which is the dream project of Thakur.

The Chief Minister said that the development of Greenfield airport will not only improve air connectivity to the state but will also boost tourism besides generating employment opportunities for local youth. The airport will also enable the landing of wide-bodied aircraft and international flights will also be able to land at the airport, he added.

He said that Greenfield Airport will be developed with a proposed runway of 3150 meters for which 2840 bigha land has been identified. The Airport Authority of India (AAI) has also conducted the Obstacle Limitation Surface (OLS) survey and Light Detection and Ranging (LIDAR) survey.

Jai Ram Thakur said that according to OLS and LIDAR survey reports, the Airport at Mandi is feasible and suitable for round-the-year operations along with night landing and operations of the AB-320 type of aircraft.

The Chief Minister further requested to extend the Chandigarh-Dharamshala route to Chamba under UDAN II, besides extending Shimla-Rampur up to Kinnaur.