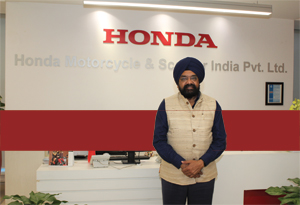 Despite being one of the youngest players in the Indian two-wheelers market, Honda Motorcycle & Scooter India Pvt. Ltd. has become the largest two wheeler manufacturer as well as the second largest two-wheelers company in India. Honda 2Wheelers India is also the fastest growing company in the country today with 4 factories in Haryana, Rajasthan, Karnataka and Gujarat. Harbhajan Singh, Director – General and Corporate Affairs – Honda 2Wheelers India throws more light on this aspect in a chat with SPOI –

Tell us about Honda 2Wheelers India’s journey and its business philosophy?

Honda 2Wheelers India is the world’s largest manufacturer of two Wheelers, recognized the world over as the symbol of two wheelers. The ‘Wings’ arrived in India as Honda Motorcycle and Scooter India Pvt. Ltd. (Honda 2Wheelers India), a 100% subsidiary of Honda Motor Company Ltd., Japan, in 1999. Since its establishment in 1999 at Manesar, District Gurugram, Haryana, Honda 2Wheelers India has lived up to its reputation of offering the highest quality at the most reasonable price. The production at the Manesar plant started in 2001. The journey thereafter has been very overwhelming and we emerged as the company that has revived the scooter market in India. Our 2nd factory came up in 2011 in Rajasthan taking up our production capacity to 1.65 million units. The 3rd factory came up in Karnataka in 2013, and our capacity became 1.8 million. In 2016 February, we added another factory in Gujarat. Recently we have added another line in our Karnataka factory which has taken the production capacity to 2.4 million. Currently we are having a production capacity of 6.4 million units. Last year we had clocked 5.02 million units and this year our target is 6 million units. And that’s how the growth has been for Honda 2Wheelers India in the Indian market.

How has been your company’s CSR journey?

Honda 2 Wheelers strives to build a culture of harmonious co-existence between people, society and environment. Towards this end, Honda 2Wheelers India has been undertaking various initiatives aimed at making a difference in the society. These initiatives initially were one off and driven by charitable motives. However, with the Companies Act, 2013, Corporate Social Responsibility (CSR) in Honda 2Wheelers India has acquired a new meaning and is working towards creating sustained need based and impact oriented initiatives in partnership with the communities and NGOs. These implementation partners and their proposals are tested on the anvil of being effective and impact-driven.

We have been spending money in all the factories wherever we operate. In Haryana it has been more than 15 crores, in Rajasthan 14 crore +, Karnataka has been slightly higher (most probably it is 18 crores) and our factory in Gujarat is somewhere close to 8 crores. We strive to be the company that the society wants to exist.

What are the key focus areas of CSR at Honda 2Wheelers India?

Honda 2Wheelers India is committed to build a sustainable business with strong social relevance and a commitment to inclusive growth and contribute to the society by supporting causes on various concerns including road safety, healthcare, environmental sustainability, promoting education, promoting sports and other rural development activities.

The company may conduct/implement CSR programs by itself and/or through registered trusts, societies and/or section 8 (previously section 25) companies with an established track record of at least three years in carrying on activities in the related area/s or as suggested by Ministry of Corporate Affairs vide circulars/notifications.

One of our key focus areas is Safety – we have been focusing in the area of safety, and thereby have built 12 safety riding parks which we operate throughout the country where we keep on giving training to the school children. Now we are coming up with a driving school in Karnal. Besides that we have recently done a project along with Haryana Police on NH1, in which we have signed a Memorandum with them. We have put up 20 police assistance booths for traffic management at a gap of every 10 kms. Whenever any accident occurs, communication happens and the rescue team reaches to the spot. And these booths are equipped with a Honda bike and are manned by trained police personnel all round the clock. These booths are also equipped with surveillance cameras and the control room of the cameras are also inside the booth. As per the latest data received from the government, around 160 lives have been saved on NH1 because of this initiative. This November, we have also inaugurated another booth on NH 8 Express Highway from Gurugram to Rewari and we will shortly inaugurate another booth on NH2. These booths are helping not only the police in traffic management and accident management but also in reducing crimes because the people around will be under CCTV coverage and the police presence is visible on the highways.

CSR is emerging as a vital aspect of doing business these days. What is your take on this?

I completely agree with this statement. CSR, especially for the private companies helps them to connect with the local society. It creates a better relationship with the local people and enables the companies to penetrate into the social fabric of the surrounding community. This eventually increases their acceptability in the society.

How do you see the evolution and future of CSR in India?

CSR has a very long way to go. So far we as a company are concerned, we have tied up with Ernst & Young as a partner in monitoring and assessing the impact of CSR. Each and every CSR project that we take up, it is first vetted by E&Y whether it comes under Clause 7 of the Act and then only it is approved. Secondly, the impact assessment of these activities is also done by them.
The challenge that I see in CSR is the increasing political intervention. I personally feel that corporates should be given free hand in order to spend the CSR money rather than binding them with too many clauses. After all the money is being spent for the good of the society.

We are still at a nascent stage, so far as CSR is concerned. Many corporates that are having profits to a scale of 6000 – 10,000 crores do not have the infrastructure to put that money. Even if they have the infrastructure, the money does not flow to the grass-root level and the corporate social activities are not visible. So I think there is still a long way to go and the competence required to spend the money will take some time.

How has CSR been integrated with the business strategies to contribute to the company’s bottom line?

People before Profits is the driving principle for us at Honda 2Wheelers India. Our highest commitment is towards sustaining and improving the environmental situation by doing as much as we can and engaging with communities at scale. Preserving the environment is at the top of the agenda for Honda 2 Wheelers and it is inspired by our vision of ‘blue skies for our children’. As a responsible corporate, Honda 2Wheelers India is actively contributing to build a greener future. This philosophy permeates through processes, technology and our implementation mechanism. At a global level, Honda 2Wheelers India is striving to lead the efforts to realise a carbon-free environment and collision-free society.

What is your opinion about the mandatory CSR law in India?

I think it has been a very good step. We appreciate the move of Government to focus on community development, social, environment change in India after the CSR mandate. More and more companies are now doing CSR and the community is becoming aware after CSR mandate and Govt. guidelines. With the CSR law evolving companies have now started focusing on sustainability, involvement of stakeholders, community to create positive impact in society.