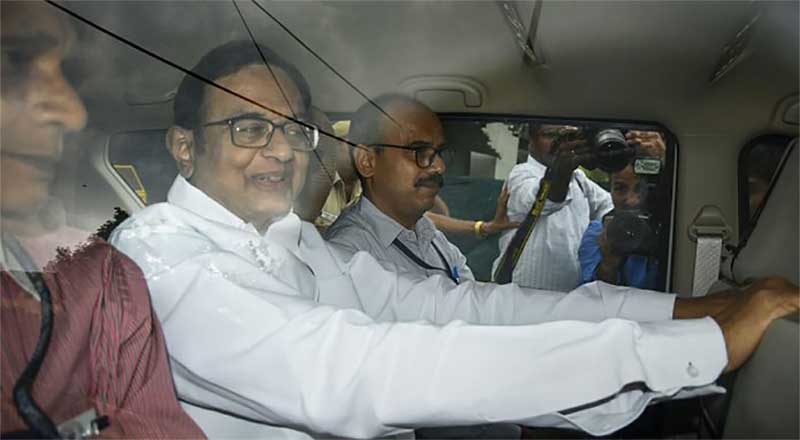 The former Union Minister was arrested from his residence after making a surprise appearance at a press meet at the Congress headquarters. The Central Bureau of Investigation on Wednesday took former Finance Minister P. Chidambaram into custody soon after he held a press conference refuting all charges against him in the INX Media case.

High drama unfolded outside Mr. Chidambaram’s residence following his arrival there after the press conference around 8.15 p.m. A CBI team, which earlier reached the Congress headquarters, scaled the wall to enter Mr. Chidambaram’s house. An ED team, led by a Joint Director-level officer, also entered the residence. Karti Chidambaram along with his father is under the scanner of the ED in multiple other dubious transactions and overseas properties.

Chidambaram’s supporters soon gathered outside, shouting slogans against the investigating agencies and the Centre. After completing the formalities, the CBI team took custody of Mr. Chidambaram around 9.30 p.m. and drove away in a car to the CBI headquarters.

Sources from the ED says that, when former promoters of INX Media Peter and Indrani Mukherjea met Chidambaram in North Block, he asked them to keep his son’s business interests in mind. They met Chidambaram to ensure that the Foreign Investment Promotion Board (FIPB) approvals, to bring Foreign Direct Investment (FDI) into their company, were fast tracked.

“ED identified payments of Rs 3.09 crore by Peter to ASCPL and associated entities controlled by Karti through manipulated debit notes. During the investigation, it was admitted that debit notes were raised on directions of Karti to show some transaction which in fact did not occur. These transfers have occurred during the time Chidambaram sanctioned FIPB approvals, so we are probing the contemporaneous nature of these transactions with the son while approvals were granted by the father,” said a senior ED official.

The official further said, “The money received by associated entities was channelled back into ASCPL. The funds received by ASCPL were invested and ASCPL also purchased shares of Vasan Healthcare. A part of these shares were sold at a profit of nearly Rs 41 crore. ASCPL also earned Rs 18.49 crore from sale of shares in another company for an amount of Rs 29.49 crore.”

The financial probe agency has attached the invoice of ground rent received by Karti’s property dealer. Sources claim that these immovable properties were bought from the proceeds of crime. It’s part of the foreign assets which have been tracked down by the ED.

P Chidambaram and his family’s name has featured in several cases, including Aircel Maxis, INX Media, Diageo Scotland and Katara Holdings. The investigating agencies have identified several such shell companies, registered in India and abroad. One of these shell companies had an investment of over Rs 300 crore.

The shell company owned by former minister’s son Karti Chidambaram also received huge payments from a company located in British Virgin Island and this company had figured in Panama Papers as well. The government sources said, the money in the shell companies was rerouted to the Chidambaram’s family and was used by them for personal expenses.

“The deposits in these shell companies have been used for meeting personal expenditure of P Chidambaram and Karti Chidambaram, opening and depositing money in more than 2 dozen foreign bank accounts and purchasing several properties in Malaysia, Spain, UK, etc,” reads the ED document.

In Box: The Enforcement Directorate has seized Karti Chidambaram’s assets worth Rs. 54 crore in India, the United Kingdom and Spain in connection with the INX Media case.

INX Media – a television company then owned by Peter and Indrani Mukerjea – in exchange for bribes. Investigators say he used the influence of his father who was Finance Minister in the UPA government at the time.

A senior CBI source related to the probe told IANS that “letters rogatory have been sent to five countries – United Kingdom, Switzerland, Bermuda, Mauritius and Singapore – seeking details of shell companies allegedly floated by Chidambaram and his son and their connected bank account details.”

As part of this process, it is critical that a detailed charge-sheet be filed at the earliest; Chidambaram’s son Karti said, after Chidambaram was arrested, that though he had been raided four times, appeared for over 20 summons – each session lasted 10-12 hours – and was arrested for 12 days, there was still no charge-sheet against him. This is a big lacuna since it allows investigation agencies to go on wild-goose chases; courts must ensure that charge-sheets are filed at the earliest.

The CBI and the ED teams had started looking for Mr. Chidambaram after his plea for anticipatory bail, which was denied by the Delhi High Court, was not entertained by the Supreme Court.

Several teams attempted to track him down, but he could not be traced till he appeared at the AICC headquarters for the press conference. In a dramatic twist to the daylong drama with news channels and the ruling government questioning Mr. Chidambaram’s alleged attempts at “evading” arrest, he appeared at the Congress headquarters at 8 p.m. to address the media.

He was accompanied by a battery of Congress leaders, including his legal team consisting of Kapil Sibal, Abhishek Singhvi, Vivek Tankha and Salman Khurshid. Also present were party general secretaries Ghulam Nabi Azad and K.C. Venugopal.

“I believe that the foundation of a democracy is liberty, [and the] most precious article of the Constitution is Article 21 that guarantees life and liberty. If I am asked to choose between life and liberty, I will choose liberty,” Mr. Chidambaram said.

He said that when he got summons from the CBI and the ED it was only natural that he moved the court to get interim relief. After rejection of the bail plea in the High Court with recommendation of his lawyers he moved the apex court.

“I was accused of running away from justice. On the contrary I was engaged in the pursuit of justice,” he added, explaining that he along with his team were working to complete the necessary papers to move the Supreme Court.

Below are the details of the property:

Minutes after his appearance, teams from both the CBI and the Enforcement Directorate arrived at his posh Jor Bagh residence. In unprecedented drama, CBI officials scaled the wall of his house to gain access.

Troubles seem to be mounting for both P Chidambaram and his son Karti Chidambaram as investigating agencies try to find links between the alleged overseas payments and Karti’s benami foreign assets. It is alleged that Karti bought many such properties from the proceeds of the bribe money he received overseas.

Meanwhile, a special CBI court has ordered the former Union finance minister to remain in the CBI custody till August 26 in connection with the INX Media case. His family and lawyers have been permitted to visit him for 30 minutes every day. The court has also asked the investigating agency to ensure that the personal dignity of the Congress leader is not violated.