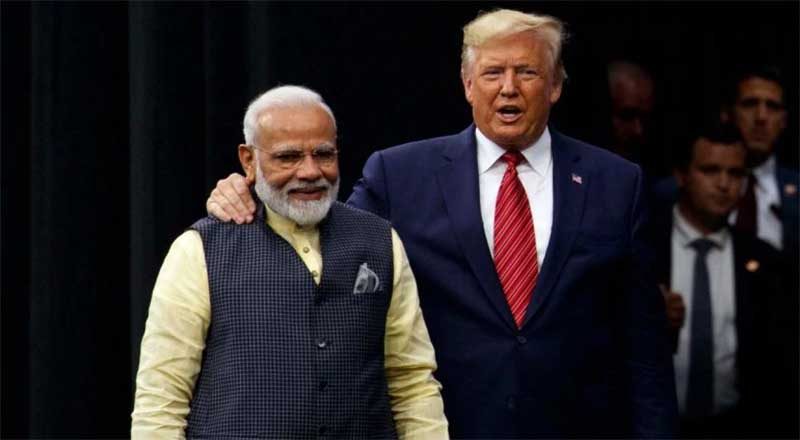 Prime Minister Narendra Modi is left to attend a mega event organised in NRG Football Stadium, Huston, United States on September 22. It is the largest gathering ever for an elected foreign leader visiting the U.S., other than the Pope. US President Donald Trump will be spending 100 minutes at the NRG Stadium where PM Modi is being hosted by the Indian diaspora.

Houston being the hub of oil and gas ,organisers say more than 50,000 people – many from the Indian-American diaspora – have registered for the event, which the White House labelled “a great opportunity to emphasise the strong ties between the two countries” and “reaffirm the strategic partnership between the world’s oldest and largest democracies”.

The rally, hosted by the Texas Indian Forum, is set to kick off around 8:45am local time (13:00 GMT) with cultural performances before Modi and Trump take the stage at NRG Stadium around 10:00am (15:00 GMT).  He is scheduled to accept an award from the Bill & Melinda Gates Foundation for his ambitious toilet-building sanitation campaign. On Sunday, Mr. Modi will be addressing the mega “Howdy Modi! Shared Dreams, Bright Future” event at the NRG Stadium.

The Gates Foundation, which focuses on health and anti-poverty programs, is honoring Mr. Modi for his ambitious Clean India campaign, centered on an initiative that has built 100 million new toilets in India over the past five years — roughly 40 every minute.

Public sanitation has vexed India for a long time, and no one can dispute that Mr. Modi has done more than any other Indian prime minister, or perhaps any other world leader, when it comes to building toilets. His campaign is widely credited with reducing disease and greatly aiding women’s safety.

Prime Minister Narendra Modi arrived in the energy capital of the world on Saturday with “Howdy”, the traditional Texan way of greetings. “Howdy Houston”, he tweeted soon after landing in Houston in the afternoon. “Looking forward to a wide range of programmes in this dynamic and energetic city today and tomorrow,” the Prime Minister tweeted.

He is scheduled to meet community leaders and hold a round-table with the CEOs of top energy companies based in Houston. India’s energy independence is one of the major goals that Modi has set for himself.

From Houston, Mr. Modi will fly to New York, he is scheduled to meet President Trump on the sidelines of the UN General Assembly.

About 500,000 people in Texas identify as Indian American, including some 150,000 in Houston. The American dream shares many similarities with emerging Indian dream, and an event of this scale suggests an opportunity to build bridges across two great democracies.