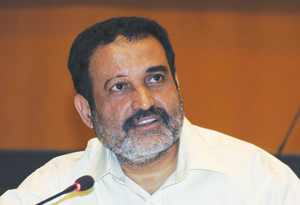 T.V. Mohandas Pai, the Chairman of Manipal Global Education and a former director of Infosys has been an active persona in the field of promoting quality education and also reforming the business ecosystem in the country. Sharing his views on Digital India and India 2020, Mohandas Pai tells VARINDIA of how India with its unique set of problems still manages to take small strides in the path of development –

What are your views on Digital India?

Digital India is an initiative of the PM of this country to create one single virtual nation. As a country, we have 29 large states, many of them bigger than most of the countries in Europe. These states have large population and it becomes very difficult to link them all together into 1 single country, because we are divided by state borders, by groups, by distances and most importantly by lack of access. Digital India seeks to create one single, virtual nation by making sure that every Indian has a smart device with a good data plan, which will help them to connect with each other. Through this connectivity, Digital India will deliver eGovernance services to every single Indian. Every Indian would then be able to get government services, certificates like birth or death, medical services, appointments to government hospitals, meetings with government officials, admissions into government schools, and all such government services for which people had to earlier stand before an officer.

Digital India will give access to high quality education to every child in India. If the govt. of India gives every child a tablet with rich multi-media content connected with 3G/WiFi, every child will be able to bridge the digital divide. This will level the field between the rich and poor, between good schools and schools that don’t have teachers, between urban and rural areas and give access to every child the equal quantum of information.

Digital India should also give access to health for all Indians. Our health records could be kept digitally and we can retrieve these records to go to any hospital of our choice for treatment.

The next area for digital India will be financial services, through which every Indian will have a bank account, a DBT (Direct Benefit Transfer) for any government money that they get as subsidy, and the government on its part will also be able to monitor if the money is being routed to the proper person.

Hence Digital India is a massive initiative to get every citizen in the 21st century access to services, education, health that would help in making their lives much richer.

As a technology evangelist, how do you see cyber security in India?

Cyber security is not a big issue. There is enough security software available, except in the case when you have a cyber attack of a deep intensity. If we take simple precautions, then we can avert cyber attacks. If we work with proper intuition, it should not be a major problem.

With India moving to digital payment system, how prepared is the country to handle any major cyber threat?

The payment system is secured, since it is controlled by the Central Bank of India. It is automated, you can encrypt information, and the data can move safely. There have been very few cyber attacks if you are aware that have been aimed at stealing someone’s money. But most of the time people have lost money because of carelessness. It is not because of system issues. Even in the Aadhaar case which was reported recently, the journalist purchased a stolen password to hack into a network. So I would say that UIDAI should be careful in letting out passwords in public.

I think India is doing very well, especially those parts that are connected. It would be unwise to compare India with Singapore or any other advanced nations because we know Singapore has only 5 million people, while Bengaluru itself has 10 million people, and UK has got 65 million population while India has 1.3 billion population. The only country we should compare ourselves with is China, and we are possibly 10 years behind China in terms of network connectivity, use of internet or use of any technology. But I would still say that India is a very unique country and is progressing at an impressive pace. It has its own set of complex problems. It has people in different stages of development. India has a high quality IT industry. We have 32,000 start-ups getting $95 billion in investments. So if we compare India with China, the path for us is very clear. Things are improving and with initiatives like Digital India succeeding, there would be no looking back.