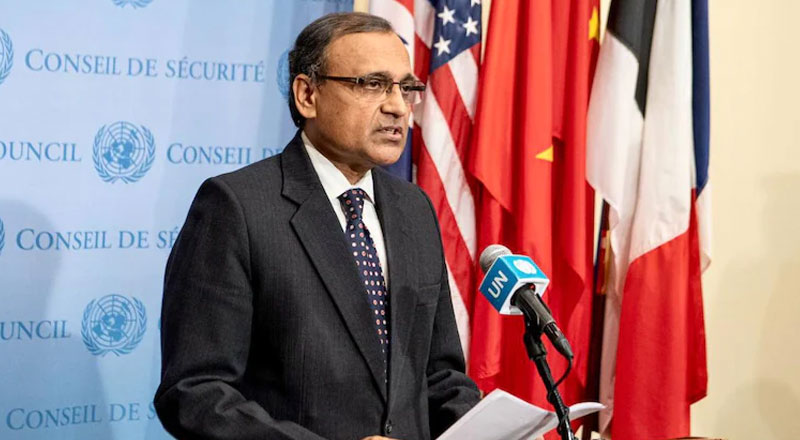 India on Monday said it rejects “selective outrage” from outside that pursues a divisive agenda.

India on Monday said it promotes a culture of tolerance and respect for all religions and deals with aberrations within its legal framework, as it rejected motivated “selective outrage” from outside that pursues a divisive agenda, after Pakistan delivered a statement on behalf of the OIC that referred to the controversial remarks made by two now-suspended BJP functionaries against the Prophet.

India’s Permanent Representative to the UN Ambassador T S Tirumurti said this while speaking at the high-level Meeting in the UN General Assembly to mark the commemoration of the first International Day for Countering Hate Speech.

“Through embracing both democracy and pluralism, India has promoted a culture of tolerance and respect for all religions and cultures under our overarching Constitutional framework. Aberrations are dealt with within our legal framework and we reject selective outrage from outside especially when they are motivated and pursue a divisive agenda as we just heard today references against India by the OIC,” Tirumurti said.

Pakistan’s envoy to the UN Munir Akram, delivering a statement at the UNGA high-level event on behalf of the Organisation of Islamic Cooperation (OIC) Group except Albania, recalled the recent statement issued by the OIC that had criticised India in the wake of the controversial remarks made against the Prophet by two BJP functionaries.

“The offensive tweets and comments denigrating a religious personality were made by certain individuals. They do not, in any manner, reflect the views of the Government of India,” Bagchi had said.

He said that strong action has already been taken against these individuals by relevant bodies.

The BJP has suspended its national spokesperson Nupur Sharma while it expelled the party’s Delhi unit media head Naveen Jindal for their controversial remarks following widespread anger in several Gulf countries over their comments.

Tirumurti said India firmly believes that a society based on the principles of democracy and pluralism provides an enabling environment for diverse religions and communities to live together.

“Today, every one of the world’s major religions have a home in India, making it a nation of unparalleled diversity.

“India has over centuries provided refuge to all, whether Zoroastrians or the Jewish community, or the Tibetan Buddhists or many from our own neighborhood,” he said.