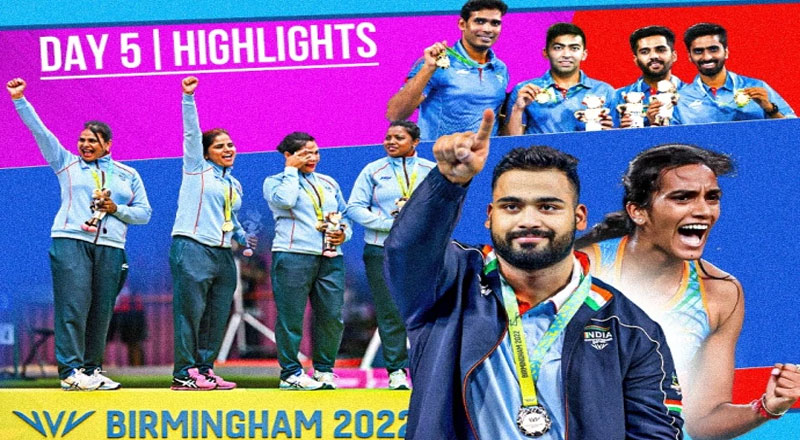 India won 4 medals on day 5 of Commonwealth Games 2022 at Birmingham. After historic gold of Lawn Bowls team in women’s fours the men’s table tennis team clinched the second gold medal of the day after beating Singapore 3-1 in the final. After that Weightlifter Vikas Thakur won a silver medal in the men’s 96kg final and badminton mixed team won a silver medal after losing to Malaysia in the final. India’s medal tally reaches 13 with 5 golds, 5 silvers and 3 bronze medals. President Smt. Droupadi Murmu, Prime Minister Shri Narendra Modi, Union Sports Minister Shri Anurag Thakur and Indians from all corner of the country congratulated team for their achievement.

President Smt. Droupadi Murmu congratulated table tennis team for winning gold at CWG 2022. President tweeted, “Congratulations to Sathiyan Gnanasekaran, Sharath Kamal, Harmeet Desai and Sanil Shetty for winning the historic gold in table tennis at CWG 2022. They showed extraordinary skill and determination. They have won the heart of the nation. I am sure this feat will inspire our youth.”

Congratulating badminton team President tweeted, “Congratulations to the members of the Indian badminton team for winning the silver medal in the Mixed Team Event Commonwealth Games. The skills, team work and fighting spirit displayed by them are remarkable. I convey my appreciation to all the players.”

In a tweet the Prime Minister said; “Congratulations to the Indian badminton team of @srikidambi, @satwiksairaj, @buss_reddy, @lakshya_sen, @Shettychirag04, Treesa Jolly, Aakarshi Kashyap, @P9Ashwini, Gayatri Gopichand and @Pvsindhu1 for winning the silver medal in the Birmingham CWG. Proud of their accomplishment.”

In another tweet PM said, “Badminton is among the most admired sports in India. The Silver medal in the CWG will go a long way in making the game even more popular and ensuring more people pursue it in the times to come.”

Congratulating weightlifter, Vikas Thakur for winning Silver Medal PM tweeted, “More glory at the CWG, this time due to Vikas Thakur, who wins a Silver in Weightlifting. Delighted by his success. His dedication to sports is commendable. Wishing him the very best for upcoming endeavours.”