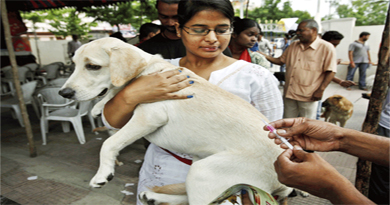 IIL has been providing various tools to control the deadly Rabies disease in the country. Every year July 6th is observed as Zoonosis Day and many Veterinary dispensaries, NGOs and Veterinarians across the country conduct Rabies awareness camps with the help of IIL. More than one lakh doses of RAKSHARAB (Rabies vaccine produced by IIL) is administered free of cost in as many as 100 centres across the country through veterinary dispensaries, NGOs etc.

IIL is the only veterinary vaccine company consistently offering this benevolent service to the society every year.

Diseases that transmit from animals to human beings are called Zoonotic diseases. Out of all microbial pathogens, above 60% causes Zoonotic diseases, while 75% of all emerging diseases are zoonotic in nature. However, occurrence of Rabies is predominant and is more than 90% of all zoonotic cases in the country.

India accounts for more than 30000 rabies related deaths per year, which is almost 1/3rd of all the cases in the world. This is due to large uncontrolled stray dog population in India. Out of about 40 million dog population in India, stray dogs account for nearly 80% of population. Due to lack of systematic vaccination and infrastructure to control stray dogs, the Rabies menace is consistently increasing in India.

Speaking on the occasion of Zoonosis Day, Dr. K. Anand Kumar, MD, IIL informed, “IIL has been playing a major supportive role in controlling Rabies and other Zoonotic diseases in the country. IIL is not just a leading manufacturer and supplier of Rabies vaccine for both human and animal use, it also contributes significantly in creating awareness about its menace among the general public along with free vaccination services”.

Other diseases such as Brucellosis, Leptospirosis, Swine Flu, Porcine Cysticercosis etc are predominant diseases that affect human beings and many people suffer from these diseases in India. Due to lack of awareness, often due to improper medical care or preventive medicines and unhygienic conditions, these diseases are spreading across the country. With increased coverage of preventive vaccination and improved hygiene, these diseases can be controlled.

IIL wishes to spread the message that preventive healthcare is a proven means to minimize incidence of zoonotic diseases. Effective implementation of Swachh Bharat programme and preventive vaccination to all susceptible species would be quite appropriate.