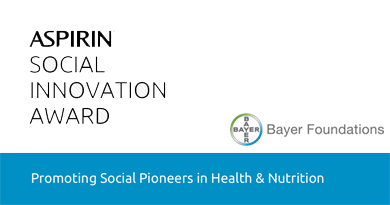 The Bayer Cares Foundation has selected six international initiatives for its global Aspirin Social Innovation Awards 2017, which recognizes novel approaches to solving humanity’s big challenges in health care and nutrition. The winners will receive EUR20,000 in prize money to further their activities.

At this year’s awards, the Audience Prize was bagged by India’s iBreastExam for its hand-held breast cancer screening device, which received over 15,000 of the 42,000 total online votes. Mammographies are unaffordable for many women in the poorer regions of the world. As a result, over 70 per cent of deadly breast cancer cases occur in developing countries, because the tumours frequently go undetected until a late stage of the disease. The time of diagnosis is a major determinant for a patient’s chances of survival.

Using the handheld iBreastExam device, physicians can conduct uncomplicated breast cancer screening tests in five minutes – and potentially change the futures of many millions of women. Developed and promoted by Mihir Shah, Matthew Campisi and Bhaumik Sanghvi, the iBreastExam is packed with sophisticated technology, uses no radiation and is painless for patients.

Other winners honored at the Aspirin Social Innovation Awards included: Matibabu, Uganda, for a revolutionary, non-invasive malaria testing device; Tetragon, Austria, for the BrailleRing, a novel online reader for the blind; Thriving Green, Kenya, for a new method of cultivating spirulina superfood algae in Africa; and HerHealth, Uganda, for an innovative gynecological home test for cervical cancer prevention The China Impact Special Award, presented for the first time by the foundation, went to the Chinese company Star Reciprocity for its online platform designed to support families with autistic children.

“The winning initiatives have the potential to improve the living conditions of many millions of people,” says Thimo V. Schmitt-Lord, Managing Director, Bayer Foundations. “With a pioneering spirit, solid expertise and high-level commitment, these entrepreneurs have developed innovative solutions to major challenges in the fields of health and nutrition. Bayer has a long tradition of supporting such proactive efforts to benefit society.”

The new Aspirin Social Innovation Award is a further development of the Aspirin Social Award, which has been presented in Germany since 2010. The award, which went international in 2016, supports social innovations in the fields of health care and nutrition that help to close gaps in social welfare and have the potential to bring about systemic change.

Since 2010, 34 entrepreneurs have received a total of EUR 255,000 in funding. The next Aspirin Social Innovation Award will be presented in November 2018.