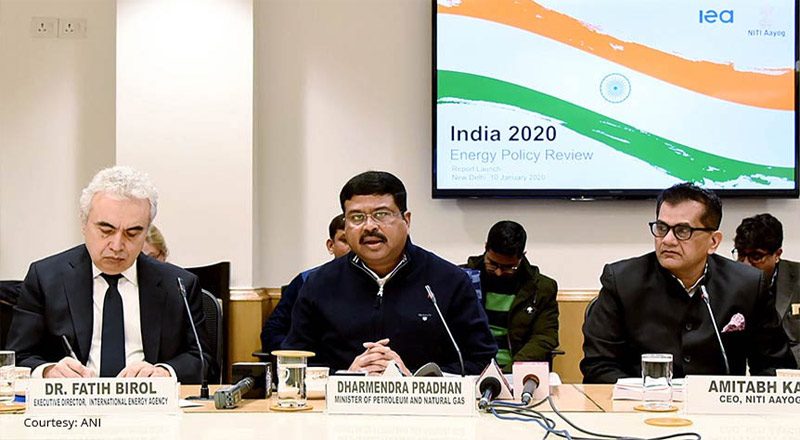 Under the framework of a new alliance, New Delhi will play a key role in enhancing global energy security.

India and the International Energy Agency (IEA) have signed a Framework for Strategic Partnership to deepen their collaboration on the pursuit of clean energy transition, energy security and a wide range of other issues, in a historic agreement being hailed as New Delhi’s stepping stone towards becoming a full member of the agency.

The partnership comes less than four years after the IEA welcomed India as an Association country, and marks a major milestone in global energy governance that could lead to eventual IEA membership for India.

The agreement was signed during a virtual ceremony on Wednesday by India’s Secretary of Power Ministry Sanjiv Nandan Sahai and IEA Executive Director Fatih Birol, who described the development as “historic” for the IEA and for international energy governance.

“India will have a critical role in shaping the world’s energy and climate future. As the leading global authority on clean energy transitions, the IEA is the perfect partner to support India as it expands and improves its energy system for the benefit of its 1.4 billion citizens,” said Dr Birol. “I believe this Strategic Partnership is the natural next step for India and the IEA that could eventually lead to full membership. We’re delighted to be further strengthening our work with India to help it pursue a secure and sustainable path forward and look forward to working closely with the Government of India to develop and coordinate the contents of the Strategic Partnership.”

India’s critical role in the global energy sector will be reflected in a forthcoming IEA India Energy Outlook which is to be published in a few weeks’ time, Dr Birol said.

The IEA and India signed the framework during a virtual ceremony, where senior representatives from India and the IEA were in attendance, including Ambassador Hiroshi Oe of Japan, the Chair of the IEA Governing Board, and Ambassador Jawed Ashraf of India.

“Today is a historic day. The signing of this agreement reaffirms and advances the invaluable relationship that IEA members and India have,” said Sahai. “Under the framework of this newly formed alliance, we will establish with the IEA the key steps for enhancing energy security and substantive cooperation across the full spectrum of IEA activities. We hope this partnership leads to an extensive exchange of knowledge and can be a stepping stone towards India becoming a full member of the IEA,” he said.

The agreement is indeed historic for a huge variety of reasons. It represents a new phase in the relationship between the IEA and India, the world’s third-largest energy consumer, making it the first IEA Association country to take a formal step to further advance ties with the agency.

Further, with India becoming increasingly influential in global energy trends, the country’s reliance on fuel imports makes energy security a key priority for the Indian economy. According to the IEA’s latest report on India’s energy policies, the country’s demand for energy is set to grow rapidly in the coming decades, with electricity use set to increase particularly fast.

“With India’s increasing involvement, the IEA is able to more fully represent global energy users and producers,” said Angus Taylor, Australia’s Minister for Energy and Emissions Reduction. “I applaud the commitment demonstrated by the Government of India in taking significant steps, not only to shore up their own domestic security but to also identify ways in which they can contribute to global energy security.”

“This signing ceremony marks a milestone of deepening the successful cooperation between India and the IEA,” said Anders Ygeman, Sweden’s Minister for Energy and Digital Development. “Together we can achieve necessary changes for a green, sustainable and inclusive energy transition globally. Sweden greatly values this deepened cooperation and I look forward to continuing working with my Indian colleagues.”

India and the IEA Fatih Birol, Executive Director of the IEA at the International Energy Forum (IEF)

India joined the IEA family as an Association in 2017, an act marked by a ceremony in New Delhi with Piyush Goyal, then Minister for Power, Coal, New and Renewable Energy and Mines; and Dharmendra Pradhan, Minister for Petroleum and Natural Gas; and the IEA’s Dr Birol. In the quick span of four years, the IEA and India have cooperated on a wide variety of topics – including the expansion of renewables, energy efficiency, the energy-environment nexus, oil stocks and emergency preparedness, data, investment and innovation. The IEA has also endorsed steps in India’s energy sector, such as the decarbonising of the iron and steel sector. The measures adopted by India to boost its global energy footprint as well as help the international community transition to cleaner energy sources such as solar power, have drawn widespread praise from all around.

“In a time when we face global key challenges, such as energy transition and the fight against climate change, we sincerely appreciate the strengthening and enhancing of the cooperation with India, a key partner for the IEA and for all of us members of the agency,” said Luigi Di Maio, Italy’s Minister of Foreign Affairs and International Cooperation. “As the current holder of the G20 Presidency and as partner of the UK in the COP26, Italy is committed to a sustainable, resilient and clean energy future, and I am sure that the Strategic Partnership with India will be a valuable asset in our common endeavor,” he said