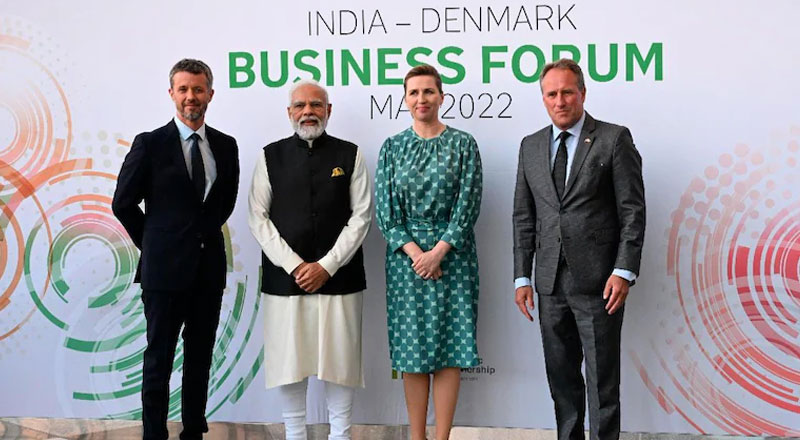 Addressing the Indian community settled in Denmark during his visit to the Nordic nation, PM Modi also asked each one of them to convince at least their five non-Indian friends to visit India.

India had no role in exploiting the planet, but is at the forefront in the efforts to save it solely backed by efforts made by every person in the country, Prime Minister Narendra Modi said in Copenhagen on Tuesday.

Addressing the Indian community, the Prime Minister spoke extensively about the steps taken by the government to promote use of renewable energy, the commitments made by India at the COP-26 climate summit in Glasgow — issues that strike a chord in the Nordic nation.

“India has been able to fulfil its climate actions because, unlike others who put all the responsibility of saving the planet on multilateral organisations, we see it as a responsibility of each citizen to do their bit to save the world,” the Prime Minister said.

Danish Prime Minister Mette Frederiksen also attended PM Modi’s interaction with the Indian diaspora and introduced him as a “friend”, before inviting him to address the packed gathering at the Bella Centre

We have to rejuvenate our tourism sector. With your efforts, when you will help five of your non-Indian friends to visit & explore our country, in a few years, there will be only one destination, that is ‘Chalo India’,” he said.

On climate action, PM Modi said India has set a target to achieve Net Zero emissions by 2070 and has been among the few countries who have been able to deliver on their climate goals.

“India had committed to source 40 per cent of its energy needs from non-fossil fuels by 2030. We have achieved that goal nine years early,” the Prime Minister said.

He said India has been producing cheap solar power at 2.5 per unit and was making efforts to further reduce the cost.

PM Modi said the world should come to India to find answers and solutions to save the planet.

“I want to tell our Danish friends to come to India to jointly find answers to the problems of the planet,” he said.

The Prime Minister urged the world to get out of the consumption oriented approach which was harmful for the planet.

“The biggest demand of the time is to promote L.I.F.E i.e. Lifestyle For Environment. It is very important to get out of a consumption oriented approach. ‘Use and throw’ mindset is negative for the planet,” PM Modi said.

The Prime Minister said Denmark has been with India in White revolution and now was becoming a strong partner in the country’s green future.

Amid chants of ‘Modi, Modi’ and ‘Modi hai to mumkin hai‘, in the auditorium, the prime minister also said that an Indian, wherever he goes in the world, contributes sincerely for ‘karmabhoomi‘ (land of work), for that country.

“Many times when I meet world leaders, they proudly tell me about the achievements of the Indian community settled in their countries,” the prime minister added, while noting that the number of Indians settled abroad was higher than the entire population of some countries.

“The discussions I had with them today will give new strength, new energy to the relations between the two countries,” he said.