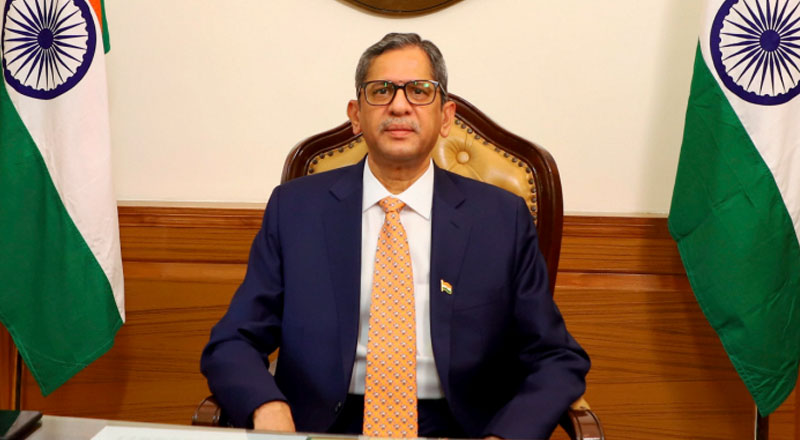 Expressing serious concern over rising violence against upright and hardworking doctors, Chief Justice of India NV Ramana on Saturday said that there are false cases lodged against them. The CJI said that he would also like to pay his tribute to the unending spirit of doctors, who work tirelessly round the clock for their patients.

“Doctors are mentors, guides, friends and counselors. They should always remain active members of society, and solve problems faced by the people,” he said.

The CJI said, “I am extremely saddened to witness rising violence against doctors. Several false cases are being lodged against upright and hardworking doctors. They need a better, and more secure, working environment.”

The CJI was speaking at the release of ‘Atlas of Breast Elastography and Ultrasound Guided Fine Needle Cytology’, a book authored by Dr Col. CS Pant and Dr Vaneeta Kapur.  He said, “This is where professional medical associations assume great significance. They have to be proactive in highlighting the demands of doctors.”

He also added that women form 50 per cent of the country’s population and they are the backbone of the family and society, therefore, their health must find equal attention and reflection in our society and policies.

“People, particularly women in the house, take care of everyone’s health except for their health. It is the duty of other family members, particularly the husband and children, to force her to go for regular health check-ups so that she will be in a position to understand her body and health,” CJI Ramana said.

He said, “We realise the importance of a wife or mother when she is no more. I realise even though my mother passed away at the age of 80, till date I realise the loss of my mother. So each family must recognise the importance of the housewife who takes care of the entire family. This is my request and it is all our duty, particularly the people in the society who are influential and who can create opinions, doctors, NGOs and celebrities to educate and create awareness above all things.”

Expressing concern about the healthcare system in India, CJI Ramana said that more than 70 per cent of the population resides in rural areas where people don’t have minimum basic amenities, forget about the comfort of corporate hospitals.

“Even Primary Health Centres (PHC) are also not properly equipped, if there is a PHC there are no doctors and if there is a doctor, there is no PHC. If both are there, there is no infrastructure. This is the situation in this country and in this scenario, this type of affordable technique of detecting cancer through ultrasound at the preliminary stage is very helpful,” the CJI said.

He thanked Dr (Col) Pant, Dr Kapur, and Dr Biswajit Sen, who contributed to the book, including his daughter Dr Sri Bhuvana N.

CJI Ramana was all praise for Dr Shiv Sarin, Vice-Chancellor of the Institute of Liver and Biliary Sciences, for pointing out serious issues like the protection of doctors, organ donation campaigns and timely promotion of doctors.

Giving some facts and figures, CJI Ramana said that in India every four minutes, one woman is diagnosed with breast cancer and it is the most common cancer in women.

He said, “27.7 per cent of all new cancers detected in women in the year 2018 were breast cancers. Every eight minutes, one woman dies of breast cancer. A total of 87,090 women died of breast cancer in 2018, which is the second-highest number in the world for that year. Around 32 per cent of new cases belong to the age group of 25 to 49 years.”

He said that cervical cancer, although the second most prevalent cancer among women, is on the decline due to rising awareness and better support.

The CJI said that the need of the hour is to generate awareness and it is essential to design breast cancer awareness campaigns on the scale of cervical cancer, anti-tobacco and pulse polio campaigns.