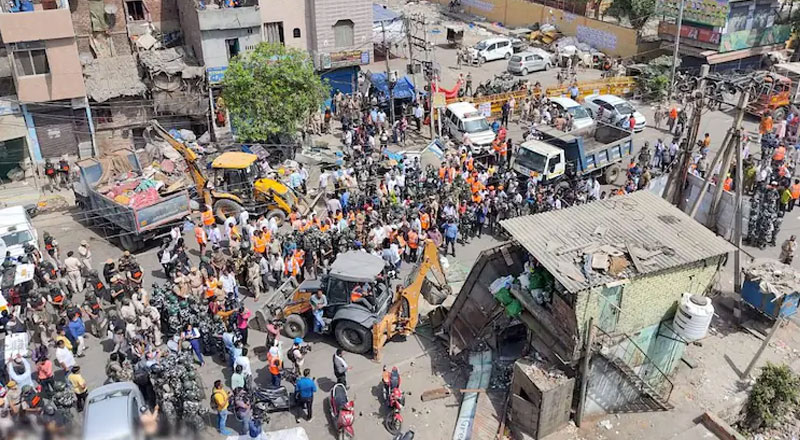 The North Delhi Municipal Corporation launched an anti-encroachment drive in Delhi’s Jahangirpuri on Wednesday. Bulldozers rolled into the area and began demolishing houses and shops. Shortly thereafter, the Supreme Court stayed the demolition drive in Jahangirpuri. The matter will be heard again on Thursday. These developments come after communal clashes broke out in Delhi’s Jahangirpuri area during a Hanuman Jayanti procession on Saturday evening. On Tuesday, Delhi BJP chief Adesh Gupta alleged that those accused of rioting in Jahangirpuri had built ‘illegal constructions’ in the area and demanded that these be demolished. Follow IndiaToday.in for LIVE updates.

Niaz Ahmed Farooqui, secretary of Jamiat Ulama-i-Hind, appealed to the home ministry to intervene and stop the demolition drive in Delhi’s Jahangirpuri.

“We’ve information that a demolition drive is underway in Jahangirpuri. We’ve sent a notice to the North Delhi Mayor, Police, Chief Secretary to stop this drive. By doing this after riots condition, you’re only favouring rioters, targeting a community. The government shouldn’t do this,” Jamiat Ulama-i-Hind secretary was quoted as saying by ANI.

“Law and order is totally under control. The situation is peaceful. We’re maintaining peace and tranquillity in the area. We have adequate deployment. We are in touch with the citizens of the area to maintain peace,” said Special CP Dependra Pathak, at Jahangirpuri in Delhi.

A Delhi Police team reached the village of Jahangirpuri violence accused in West Bengal’s Haldia. The locals at Gopal Chawk village were unable to identify the accused, Dilshad, and said his father had left the village many years ago.

(With inputs from Rittick Mondal)

The Delhi High Court said on Wednesday that it will not hear the Jahangirpuri demolition case since the Supreme Court has already stepped in.

12:50 PM ISTPosted by Tarini MehtaBulldozing stops in Jahangirpuri after SC steps in for second time

The police confirmed that bulldozing has been stopped in Jahangirpuri. This comes after the Supreme Court ordered that authorities be directed to stop the demolition drive.