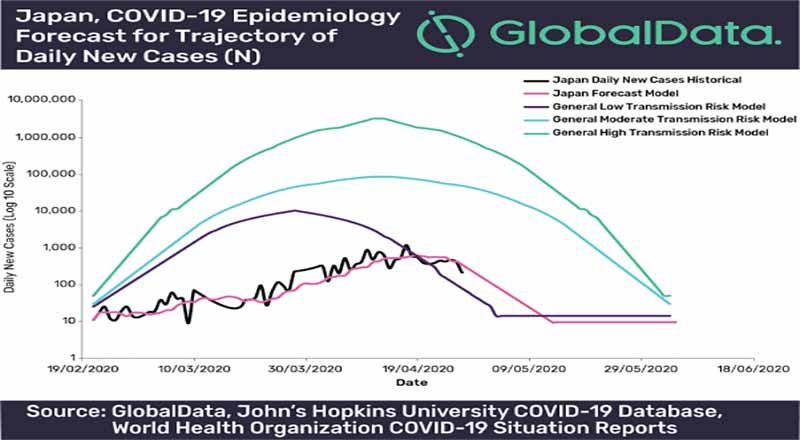 Japan has already witnessed a significant downturn in the number of new daily COVID-19 cases since the national emergency was declared. However, the country is likely to see additional surges in the future, according to an infection trajectory forecast model by GlobalData, a leading data and analytics company.

Kasey Fu, Director of Epidemiology at GlobalData, comments: “As COVID-19 continues to spread around the world, analyzing differences in the infection trajectory is important to understand how the virus will continue to spread.”

GlobalData has forecasted Japan’s trajectory in the next several weeks, along with the country’s historical data of daily new cases plotted against general transmission risk models.

Fu continues: “GlobalData’s epidemiology team used its experience in modeling the global COVID-19 outbreak to examine the factors causing Asian countries to have different outbreak trajectories and produced an alternate forecast model for Japan. One-size-fits-all recommendations to counter the outbreak will not be effective, as the pandemic is showing different outcomes in each country. Governments need to tailor solutions to their own unique situations.”

A new severe viral infection with the number of new infections originating from a single case that is higher than 1, such as COVID-19, would be expected to spread rapidly after being introduced into an immune-naïve population. The general transmission risk models follow this expectation. Countries like the US, Italy and Spain experienced this type of trajectory, with cases in these markets doubling every two to five days during the first few months of the outbreak.

However, this scenario did not play out in Japan because of the fast, strong, early counter measures that were taken. Japan responded rapidly in the beginning stages of the outbreak, likely due to its experience with past viral outbreaks such as severe acute respiratory syndrome (SARS) and Middle East respiratory syndrome (MERS), as well as the nation’s general hygiene practices and citizens’ tendency to wear masks when out in public.

Fu concludes: “It is unclear what has caused the second surge in cases, but it is likely due to a combination of uncontrolled imported cases, undetected domestic transmission, and failure to meet testing demands. Unlike South Korea, testing in Japan was not scaled up to the general public and was limited to those fitting specific criteria.”