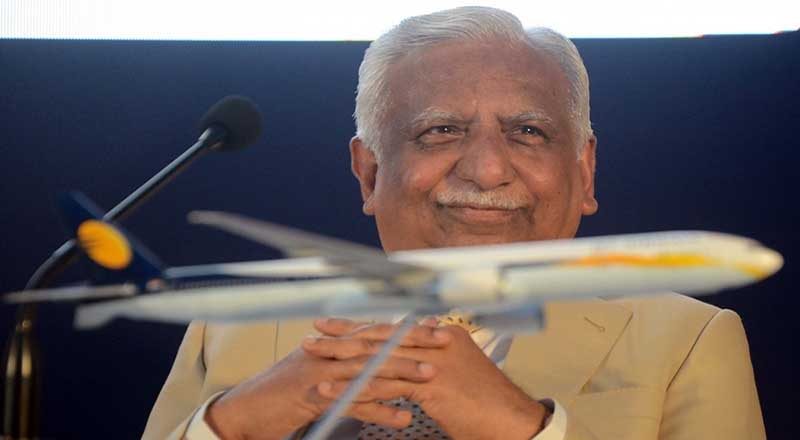 Jet Airways temporary shutdown and halted all flight operations indefinitely from wednesday raises many questions on why this most admired airlines got into the stage of sick airlines, the sources said,Promoters are purely responsible for the debacle and they only have to comet with the revival Plan to save the debit ridden Airways. Says OfficialJet Airways’ temporary shutdown has significantly aggravated problems for the airline with potential investors asking lenders to take an upto-80% haircut on their Rs 8,500-crore debt. The bidders have also severely criticised the banks’ reluctance to release emergency loans. Now a question arises on why the Public Sector banks will come into the picture, that could be the reason why the Banks are thinking not twice but thrice on it. However, the lenders have selected four suitors including Etihad Airways and NIIF to place bids for the airline, the report says. Attach

Naresh Goyal ( NG) is a icon player in this flying business in India and the luck always favoured from the day of inception in 1994,where Jet Airways wan owned 60 percent by Naresh Goyal and his wife and 20percent each by Kuwait Airways and Gulf Air,that time the Government policy, permitted investment in domestic airlines by a foreign carrier and Goyal took full advantage of it. As a leader in tis industry, the airline was operating with the higher cost in compare to all the rival airlines, also by paying the higher salaries.Sources revealed, It used to buy its aircraft at higher price.It has higher sales and distribution costa than the rivals and at the same time paying commission to JetAir Pvt. Ltd.owned by Naresh Goyal, with the register office at, JETAIR HOUSE, 13 COMMUNITY CENTER YUSUF SARAI NEW DELHI.

Jet Airways which was operating in more than 600 flights with a fleet of 119 planes, with the indefinite suspend of operations the future of 16,000 employees are on stake, many of the staffs salaries are not been paid for months, and the passengers are facing problem of flying to their destinations, at the same time , higher ticket prices by the competitors ( Indigo, Spicejet and Vistara) to gain the market share.Since the most crucial General Election in India is going on, the present government and no-one wants Jet to go underground.Jet Airways is in discussions with its largest lender to SBI for raising short-term loans worth Rs 1,500 crore to meet its working capital requirement and other obligations. Jet Airways is expected get the guarantee from Etihad Airways, which holds 24 per cent stake in the Jet Airways to provide guarantee for the loan.Now,the entire mess in the hands of Rajnish Kumar,Chairman,State Bank Of India.

Sources said, EY is carrying out a forensic audit of the Jet Airways on the orders of the airline’s largest lender for alleged irregularities.

Jet Airways ,which is the biggest operator in Mumbai is in the  crisis where hares are getting sink which is expected, has opened a window of opportunity for other airlines, this brings the opportunity for the other airlines are taking advantage of the gape for grabbing the market share.Many says, rivals are looting available slots because of Jet’s shutdown. As per the release, SpiceJet would add 27 planes soon, at the same time IndiGo has been inducting new Airbus SE A320 neos into its fleet.With this crisis increases the fare of Airlines to 30-40%.Jet Airways’ temporarily shutdown a setback for the Indian aviation, says,Ashwani Lohani,chief of Air India.

$1.2 billion of bank debt ridden Jet Airways, now the lenders led by the State Bank of India declined to extend more funds to keep the carrier going. Jet shares share are down with 34 per cent in their biggest intraday fall after the airline suspended operations temporarily after failing to secure emergency funds, with this the company worth has reached to ₹1,850 crore and expected to go further down in the next day trading on Monday, after a long holiday of 3 days, versus ₹11,100 crore at its peak in 2005.

The lenders, led by State Bank of India, choosen Etihad Airways, National Investment and Infrastructure Fund (NIIF), TPG Capital and Indigo Partners as the qualified bidders. They have to submit binding bids by May 10. Initially the banks had assured Rs 1,500 crore to Jet but released just Rs 200 crore. A fresh request for Rs 983 crore was rejected. This decision too has been criticised by prospective investors. Since, banks are also answerable.Technically, the blame game should stop by the name if the banks.It is absolutely a discussion on who will take what stake and equity in the Airlines.a expert revels.

At the same time the resolution plan is going on and it is expected to bring ₹4,000-crore funding for the airline to operate.Key stakeholders of Jet Airways including Etihad Airways, Naresh Goyal and the lenders seem to have teamed up a resolution plan which could result in an interim fresh funding of Rs. 4,000 crore into the debt ridden airline in addition to fresh equity infusion with the fresh changes in the shareholding pattern.

Under the proposed agreement, overall shareholding of Jet Airways will change, with the promoter group ownership coming down to 17 per cent compared to 51 per cent. Jet Airways currently owes Rs. 450 crore to Naresh Goyal, which will be converted to equity. In addition, the promoter group has infused Rs. 250 crore. Goyal will be made Chairman Emeritus with no say in the day-to-day running of the airline. A subject matter expert says, they have the doubts over whether a successful deal will be completed.Only Naresh Goel has to come up with the idea to revive his Airlines, else it will feel the crisis where the citizens and employees are going to suffer with the rising cost by the other Airlines, for taking the short term advantages.

Reactions from the Employees of Jet Airways

Jet Airways employees protested at Jantar Mantar, New Delhi, and gathered outside its Mumbai headquarters, after the airline halted all flight operations indefinitely. “I feel like my hands are tied and I can’t sleep at night,” said a 53-year-old baggage handler, who is a father of two. “We have stopped going out for movies, to restaurants or any other form of entertainment,” an engineer said. Zoya Shaikh, a 23-year-old Jet Airways airport agent in Mumbai, said she was still waiting for this month’s salary. “There is no clear idea of what is happening. We have been told by the airline management to wait for what the bidders plan to do,,she says.

Jet Airways pilots have also complained that they haven’t been paid in four months. In New Delhi, hundreds of employees in uniforms — including flight attendants in the airline’s signature yellow — appealed for Prime Minister Narendra Modi to step in, some holding signs that read, “Save Jet Airways, save our family.”

“My kids are asking for medicine. Who do we go to and beg? If we don’t ask the government, who do we ask?” Rajender Kumar, a Jet Airways baggage handler, said. At the same time the travel agents in New Delhi said Jet Airways’ grounding was affecting prices and availability of flights in and outside of India.

A senior official of the Directorate General of Civil Aviation (DGCA) said, the regulator would take action in accordance with due procedure under relevant regulations..A question again arises where the promoters have diverted their funds ,weather towards some other business. Now the DGCA would be asking the company for concrete and credible revival plan to restart the suspended operations, the official sources said.

On Thursday, SBI said in a statement: “The lenders after due deliberations decided that the best way forward for the survival of Jet Airways is to get the binding bids from potential investors who have expressed EOI [expressions of interest] and have been issued bid documents on 16th April. Lenders are reasonably hopeful that the bid process is likely to be successful in determining fair value of the enterprise in a transparent manner.”

The International Air Transport Association (IATA), a grouping of world airlines, suspended Jet’s membership of its clearing house system, a move that is likely to impact the process of refunding passengers. According to IATA, the system enables airlines and associated firms to settle their passenger, cargo and other miscellaneous billings in a way that reduces cost and risk.