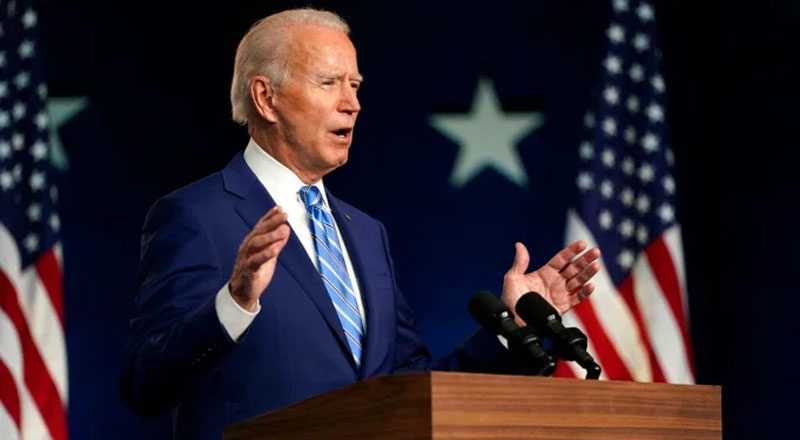 Joe Biden brings the victory in the history of US and his running mate Kamala Harris will make history as the first ever female, black, Asian American Vice President. Presidential nominee Joe Biden delivers remarks at the Chase Center in Wilmington, Delaware, on November 6, 2020. Harris is expected to play a critical role in shaping the Biden administration’s polices.

Biden won more than 73 million votes, the most ever for a U.S. presidential candidate.

At the same time, the Democrat nominee pulling ahead in the battleground states of Georgia and Pennsylvania to forge a path to the presidency. Seems Biden to emerge as the clear winner.

Biden, meanwhile, has stuck to the “each ballot must be counted” mantra. Set to be the oldest man to become American President, he will be entering the White House amidst a pandemic and one of the highest rates of unemployment in the country’s history. President Ram Nath Kovind, Prime Minister Narendra Modi, Congress leader Sonia Gandhi along with other Indian leaders congratulated Joe Biden on his US presidential poll win and said they would look forward to the strengthening of Indo-US ties going forward.

In the past three days, Trump has made numerous unsubstantiated claims of electoral fraud as his lead in the battleground states evaporated. It remains to be seen how any legal challenge mounted by him plays out, given that the U.S. Supreme Court is packed with conservative judges.

President-elect Joe Biden will deliver a boost to global stock markets and the U.S. and world economy. Although a Biden win was pretty much priced-in by the markets, his victory will eliminate uncertainty – which they loathe – and they will rally further as a result.

“Even possible legal challenges from Trump will be dismissed by investors who will instead be focusing on the renewed certainty and stability that a Biden White House will bring, including in key areas such as trade tensions with China, keeping the U.S. in the World Health Organization, resigning the Paris climate agreement, and abiding by other international agreements and long-standing international allies.”

Biden will need to work with the Republican-led Senate to secure fiscal stimulus to bolster the economy. He might struggle to get the $3trn wanted by Democrats, but some package is likely. This will buoy the markets and would have investors think about a broader-based economic recovery – rather than a narrower, tech-heavy one.

As the world’s largest economy, sustainable, long-term growth in the U.S. will have a positive ripple effect for the world economy. The reduced chance of massive fiscal stimulus will also mount pressure on the Federal Reserve “to inject further liquidity.

In addition, the Biden win without full Senate support means less risk of regulation and higher corporate and personal taxes, which will give more oxygen to the markets and economy.

The world is looking at America, it needs to lead the world economy in a positive, forward-thinking and smartly way – and at pace. If it doesn’t, we can expect American economic dominance to ultimately be replaced by an emerging and fast-growing Asia.

Even before Joe Biden secured victory in the presidential election, his staff was reaching out to tech industry advocates and executives, seeking their input on how his administration should reshape internet and telecommunications policies, said a person involved in the conversations and another who was briefed about them.

The outreach from the Biden campaign marks a significant reversal from the past four years, as the Trump administration often sought photo opportunities with industry executives while ignoring their input on key issues such as trade and immigration policies.

For tech industry leaders, the Biden campaign’s early efforts to cultivate them offered hope of a return to more systematic policy formulation, one that is likely to rely on building consensus within the industry. The Trump administration’s policies, in contrast, often appeared to be developed on an ad hoc basis and sometimes seemed designed to hurt companies the president disfavored or benefit those he liked.

Biden is expected to seek sharp breaks with some of Trump’s policies, such as reversing corporate tax cuts. Other policies, such as antitrust enforcement against big tech companies and reform of Section 230, the law that shields tech companies from lawsuits over content posted by their users online, may see some level of continuity between the Trump and Biden administrations.

Many industry pundits could see big changes to come under the Biden administration.