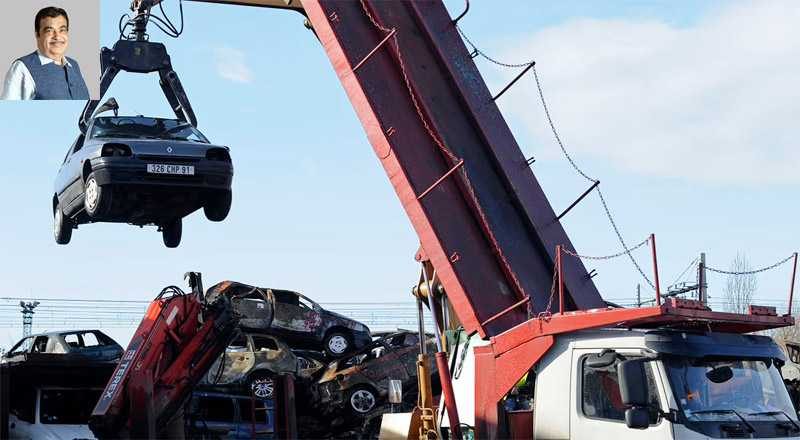 There is good news for consumers who are going to junk their old vehicles and buy a new one under the Vehicle Scrapping Policy as automakers will give about 5 per cent rebate on the new purchase, Union minister Nitin Gadkari has said. The voluntary vehicle scrapping policy announced in the Union Budget for 2021-22 provides for fitness test after 20 years for personal vehicles while commercial vehicles would require it after the completion of 15 years. Automobile manufacturers will provide about 5 per cent rebate on new car purchases” to the consumers in lieu of scrapping of the old, Road Transport, Highways and MSMEs Minister Gakdari told PTI.

“There are four major components of the policy…Apart from rebate, there are provisions of green taxes and other levies on old polluting vehicles. These will be required to undergo mandatory fitness and pollution tests in automated facilities. For this automated fitness centres would be required through out in the country and we are working in that direction,” Gadkari said.

Green’ tax mooted for personal vehicles older than 15 years . Driving such vehicles that fail to pass automated tests will attract huge penalties and also be impounded, the minister said.

This policy is going to be a boon for the automobile sector, making it one of the most profitable sectors which in turn would generate huge employment, the minister said. The policy is touted as a major step to boost the Indian automobile sector, reeling under the adverse impact of the COVID-19 pandemic.

The minister said it would lead to a 30 per cent boost to the Indian automobile industry turnover to Rs 10 lakh crore in the years to come from the present about Rs 4.5 lakh crore.

He said the policy will give a boost to new technologies with better mileage of vehicles besides promoting green fuel and electricity and cut on India’s huge Rs 8 lakh crore crude import bill which is likely to increase to about Rs 18 lakh crore.

“This policy will result in increase in vehicle demand which in turn would boost revenue. Also, ancillary industries would come up in large numbers thriving on junk vehicles,” the minister said.

The minister said initially about one crore polluting vehicles would go for scrapping. Of this an estimated 51 lakh will be light motor vehicles (LMVs) that are above 20 years of age and another 34 lakh LMVs that are above 15 years.

It would also cover 17 lakh medium and heavy motor vehicles, which are above 15 years, and currently without valid fitness certificates, he said. It will give a boost to ‘Aatmanirbhar Bharat’ campaign, he added.

Listing the advantages of scrapping, the Road Transport and Highways Ministry had earlier said that an old four-seater sedan will result in a loss of Rs 1.8 lakh in five years while for a heavy vehicle it comes to Rs 8 lakh for a period of three years.