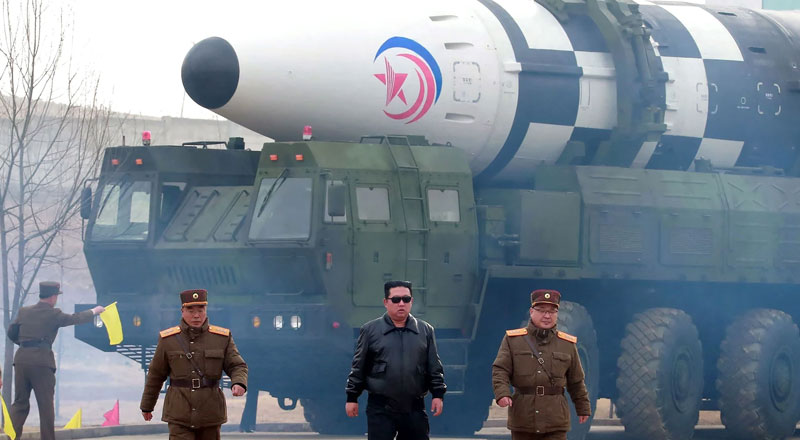 KCNA cites Kim as saying North Korea will “continue to take steps to further bolster and develop its nuclear forces at the maximum speed.” Kim’s speech came as North Korea remains locked in a long-running diplomatic standoff with the United States over the North’s nuclear program.

The North’s official Korean Central News Agency said Tuesday that Kim made the remarks during a military parade the previous night.

KCNA cites Kim as saying North Korea will “continue to take steps to further bolster and develop its nuclear forces at the maximum speed.”

Kim’s speech came as North Korea remains locked in a long-running diplomatic standoff with the United States over the North’s nuclear program.

In recent months, Kim carried out a spate of missile tests in what experts say was an attempt to pressure the U.S. to win sanctions relief and other concessions.

North Korea began a much-anticipated military parade in its capital on Monday to mark the 90th anniversary of its army’s founding, with outside experts saying it was likely to display powerful missiles and other weapons capable of targeting the United States and its allies

South Korea’s military said the march began late Monday evening in Pyongyang after a pre-parade ceremony. It didn’t immediately provide other details, such as whether North Korean leader Kim Jong Un was present.

NK News, a North Korea-focused news site, cited unidentified sources as saying that 12 illuminated flying objects, possibly drones or helicopters, were seen in the sky above Pyongyang, followed by the sounds of fireworks.

In past parades, North Korea has often displayed newly built nuclear-capable missiles and goose-stepping soldiers in an attempt to intimidate its rivals and bolster internal unity. Kim has also given speeches highlighting his commitment to boosting the armed forces to cope with what he calls U.S. hostility.

The parade comes as Kim is reviving nuclear brinkmanship aimed at forcing the United States to accept North Korea as a nuclear power and remove crippling economic sanctions. Analysts say North Korea is exploiting a favorable environment to push forward its weapons program as the United Nations Security Council remains divided over Russia’s war in Ukraine. Nuclear negotiations between Washington and Pyongyang have been stalled since 2019 because of disagreements over the potential easing of U.S.-led sanctions in exchange for North Korean disarmament steps.

Kim has stuck to his goals of simultaneously developing nuclear weapons and the country’s dismal economy in face of international pressure and has shown no willingness to fully surrender a nuclear arsenal he sees as his biggest guarantee of survival. North Korea has conducted 13 rounds of weapons tests this year, including its first flight test of an intercontinental ballistic missile since 2017.

There are also signs that North Korea is rebuilding tunnels at a nuclear testing ground that was last active in 2017, possibly in preparation for a resumption of testing. It could also conduct a banned launch of a long-range rocket to put a spy satellite into orbit or test-fly missiles over Japan, experts say. North Korean state media did not immediately report the parade. Earlier Monday, official newspapers ran editorials calling for stronger public support of Kim

The respected Comrade Kim Jong Un is the symbol of the mightiness of our party, state and revolutionary armed forces and the representative of their great dignity,” the main Rodong Sinmun newspaper said in an editorial. “All happiness and rosy future lie in following the respected General Secretary Kim Jong Un.”

North Korea’s recently tested weapons are potentially capable of striking the U.S. homeland as well as South Korea and Japan. The North has spent much of the past three years focusing on expanding its short-range arsenal targeting South Korea as nuclear negotiations with the United States stalled.

Kim’s aggressive military push could also be motivated by domestic politics since he doesn’t otherwise have significant accomplishments to show to his people as he marks a decade in power. He failed to win badly needed sanctions relief from his diplomacy with former U.S. President Donald Trump, and the COVID-19 pandemic unleashed further shocks to the country’s broken economy, forcing him to acknowledge last year that North Korea was facing its “worst-ever situation.”