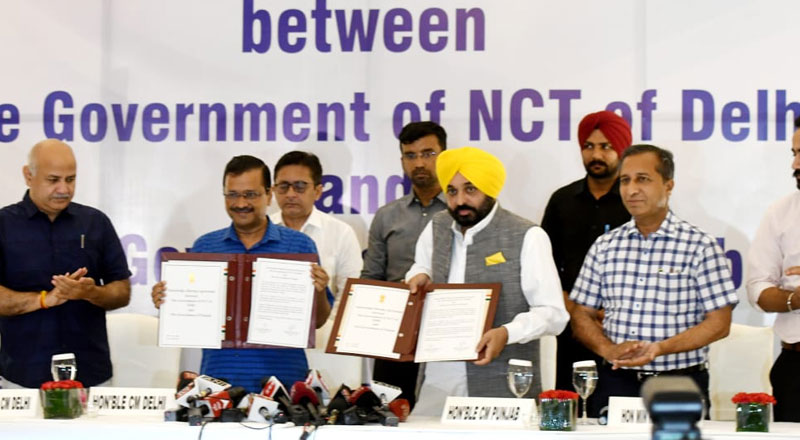 Delhi Chief Minister Arvind Kejriwal on Tuesday announced that a Knowledge Sharing Agreement has been signed between the state government of Delhi and Punjab. Addressing a press conference in the national capital in this regard, Kejriwal said,

We have just signed the knowledge sharing agreement. It is a new step in the history of India that we have signed an agreement to share knowledge. It is wrong to say that till now, only we have done good work. We know that many state governments have done good work. But till date, we have not done the work of learning from each other. Several states chose to remain divided among the parties.”

Good work done in the field of education and healthcare in Delhi is being discussed all over the world. CM Bhagwant Mann was on a two-day visit to Delhi with his ministers and officials in this regard. He visited the schools, hospitals, Mohalla clinics etc here,” he said.

Earlier on Monday, Chief Minister Bhagwant Mann said that the Punjab government will replicate Delhi’s education model in the state where students from all economic backgrounds will get quality education.

The Delhi Chief Minister also slammed those who opposed Delhi’s model of education. He said today, “Our leader Manish Sisodia is on a visit to Finland to know about their education system. Sisodia, after garnering information, will try to implement Finland’s model of education here. However, some say that Delhi’s government is being run from Finland, Italy. What is the matter with them? Later, such critics will say that Tamil Nadu government is being run from Delhi, is it?