A survey conducted by GlobalData between 6 April and 20 April about the use of telemedicine during the COVID-19 crisis saw an overwhelming majority of respondents claim they expect telemedicine to play a very important role in the fight against the virus, as indicated by 67% of 853 respondents. In addition, telemedicine was rated by 28% of 935 respondents as the emerging technology that will have the greatest impact on managing the outbreak.

Kathryn Whitney, MSc, Director of Thematic Analysis, GlobalData, comments: “Telemedicine has been touted as a critical strategy during the COVID-19 emergency to limit the risk of person-to-person transmission of the virus as social distancing becomes the norm. However, despite the potential of the technology, lack of patient awareness was considered the biggest challenge to uptake of the technology, as indicated by 52% of 813 respondents, followed by legal and regulatory issues (15% of respondents).” 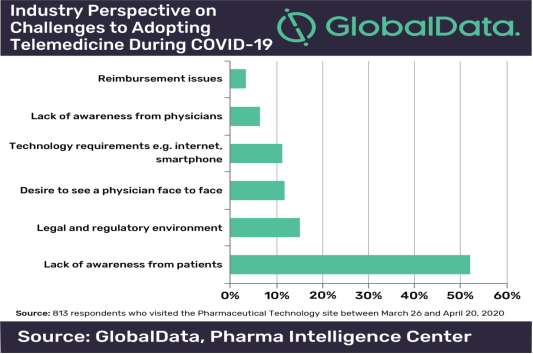 Whitney continues: “Prior to the COVID-19 health emergency, telehealth had never reached its full potential in the US. There were a number of barriers preventing its widespread uptake, including lack of reimbursement by Medicaid and restrictions affecting access for rural populations by Medicare. GlobalData believes that recent changes to regulations will rapidly expand access to these services and drive the use of telehealth, as more US cities and states are locked down to mitigate the spread and impact of the virus.

“Since early March, regulations in the US governing the use of telemedicine have changed rapidly, which will expand access to services during the COVID-19 emergency.”