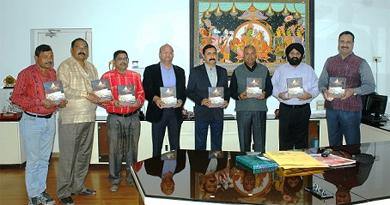 Appreciating the efforts of the author in bringing out the detailed history of western Odisha, the CMD said, “It is a duty of every citizen to contribute towards the preservation of the history for coming generation”.

Supported by Mahanadi Coalfields Limited, “Sambalpur Itihaas” chronicles the history and has rare references such as judgments pertaining to mutiny of Veer Surendra Sai and others, diamond mines of Sambalpur, important letters written between top government officials and instrument of accession of princely States, letters from Gandhiji and Fraser, reports On Sambalpur British Imperialism.

Having references from old newspapers on Sambalpur and other documentary evidence, the book also speaks about Iskander Mirza, the first President of Pakistan, who was Political Agent for the Britishers in Sambalpur.