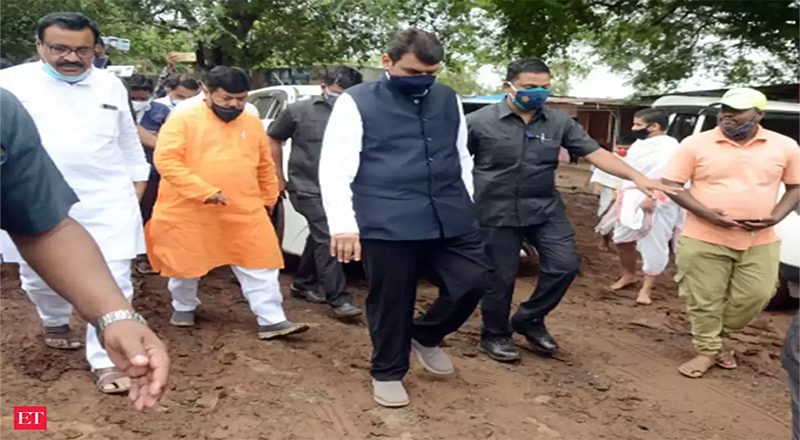 Leader of Opposition in the Maharashtra Assembly Devendra Fadnavis on Sunday urged Chief Minister Uddhav Thackeray to convene an all-party meeting to discuss long-term measures for tackling floods, in the wake of some parts of the state facing deluge after heavy rains last month.

Fadnavis, who toured flood-ravaged areas of the Konkan region and western Maharashtra over the last few days, in a letter to the chief minister said all previous reports pertaining to floods should be studied

He also sought a separate disaster management authority for districts in Konkan, considering the frequency of natural calamities in the region.

For deliberating on long-term measures, an all-party meeting should be convened,” the former CM said in the letter while listing 26 demands

He sought a separate fund to provide immediate financial assistance to the kin of the flood victims and the affected people.

Cleanliness of the flood-hit areas should also be taken up on priority, Fadnavis said.
He demanded that the administration take steps to provide food, clothing, medicines and temporary shelter to the flood affected people.

Fadnavis said around 700 COVID-19 patients and 25 deaths are reported every day in Kolhapur, and demanded special safety precautions against the viral infection.

Notably, Kolhapur in western Maharashtra was severely affected by floods last month.
Fadnavis said the financial aid for crop losses and cleaning of agriculture land should be deposited in the bank accounts of farmers immediately.

He also demanded financial assistance for fishermen in the Konkan region and for shopkeepers in flood-hit areas.

Special loan scheme at concessional interest rates should be formulated for different sections of society to resurrect their lives, he said.

The government should help banks to implement such a scheme, he added
Fadnavis also said a scheme initiated during his government’s tenure about the construction of diversion canals to channelise flood waters to drought-hit areas should be expedited.