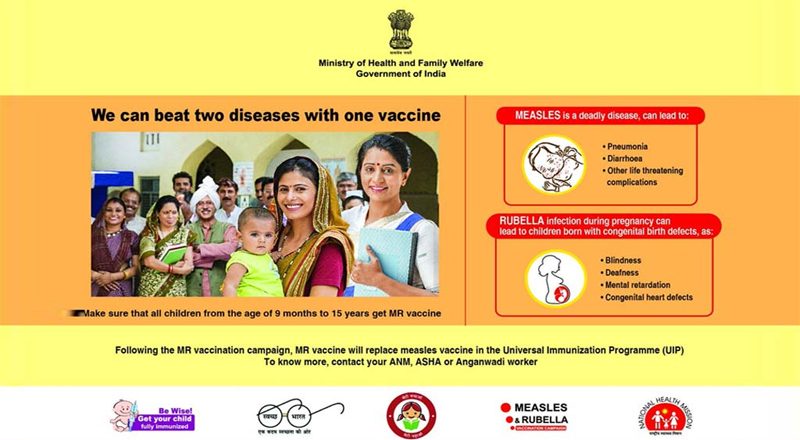 India, along with ten other WHO South East Asia Region member countries have resolved to eliminate measles and control rubella/congenital rubella syndrome (CRS) by 2020. In this direction, Ministry of Health & Family Welfare has initiated measles-rubella (MR) vaccination campaign in the age group of 9 months to less than 15 years in a phased manner across the nation. The campaign aims to cover approximately 41 crore children and is going to be the largest ever vaccination campaign worldwide. All children from 9 months to less than 15 years of age will be given a single shot of Measles-Rubella (MR) vaccination during the campaign. Following the campaign, MR vaccine will become a part of routine immunization and will replace measles vaccine, currently given at 9-12 months and 16-24 months of age of child.

The first phase of measles-rubella vaccination campaign has been successfully completed in five states, namely, Tamil Nadu, Karnataka, Goa, Lakshadweep and Puducherry. More than 3.3 crore children were vaccinated, reaching out to 97% of the intended age group. The campaign was carried out in schools, community centers and health facilities. The next round is starting in 8 states/UTs (Andhra Pradesh, Chandigarh, Dadra & Nagar Haveli, Daman & Diu, Himachal Pradesh, Kerala, Telangana and Uttarakhand) from August 2017, aiming to cover 3.4 crore children.

The campaign aims to rapidly build up immunity for both measles and rubella diseases in the community so as to knock out the disease, therefore, all the children should receive MR vaccine during the campaign. For those children who have already received such vaccination, the campaign dose would provide additional boosting to them. In order to achieve maximum coverage during the campaign, multiple stakeholders have been involved, which includes, apart from Ministry of Health & Family Welfare, other Ministries, development partners, Lions clubs, professional bodies, for example, Indian Association of Pediatrics, Indian Medical Association, Civil Society Organizations etc.

The Measles-Rubella campaign is a part of global efforts to reduce illness and deaths due to measles and rubella/CRS in the country. Measles immunization directly contributes to the reduction of under-five child mortality, and in combination with rubella vaccine, it will control rubella and prevent CRS.