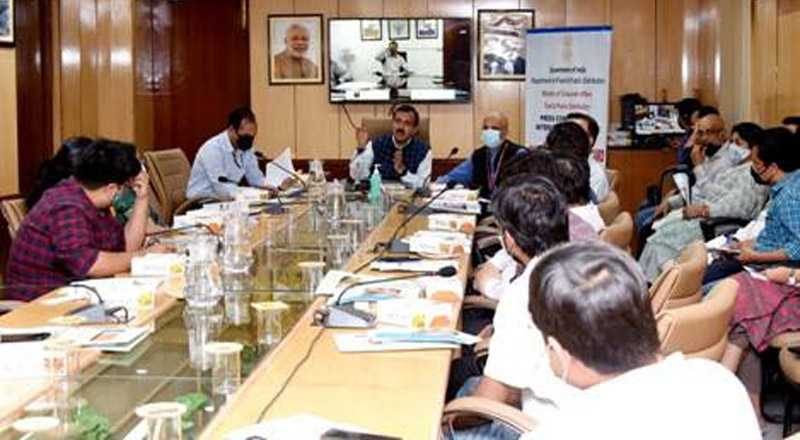 Shri Sudhanshu Pandey, Secretary, Department of Food & Public Distribution said, while addressing a Press Conference on “One Nation One Ration Card” (ONORC) plan. On this occasion Secretary also launches Mera Ration mobile app. This app will benefit especially those ration card holders who move to new areas for livelihoods. Shri Pandey said that the system which was started initially in 4 States in August 2019 has been swiftly rolled out in a very short span of time in 32 States/UTs by December 2020 and the integration of remaining 4 States/UT (Assam, Chhattisgarh, Delhi and West Bengal) is expected to be completed in next few months.

Shri Pandey informed that at present, the system covers nearly 69 Crore NFSA beneficiaries (about 86% NFSA population) in the country and a monthly average of about 1.5~1.6 Crore portability transactions are being recorded under ONORC.

Further in his briefing, Shri Pandey informed that the ONORC has proved to be a tremendous value-added service to each NFSA beneficiary during the COVID-19 pandemic, particularly migrants, which allowed them to avail the benefit of subsidised foodgrains with flexibility from any location wherever they were during the lockdown/crisis period. The freedom of choosing any FPS was not available earlier. During the period April 2020 to Feb 2021, a total of about 15.4 Crore portability transactions have been recorded under ONORC.

With regards to reaching out to migrant NFSA beneficiaries, he said that the Department is continuously collaborating with other Ministries/Departments too. He said that the integration of Migrants’ Portal with ONROC system is undertaking with the support of M/o Labour & Employment,ONORC has been made a part of PM SVANidhi program of M/o Housing & Urban Affairs,Awareness campaigning (announcements and display of A/Vs at railway stations) for migrants travelling through trains, including Shramik Specials withIndian Railwaysand Development of IEC/Creatives and media publicity through M/o Information & Broadcasting, Press Information Bureau, MyGov, Bureau of Outreach & Communication.

A vigorous awareness generation campaigning – in Hindi & Regional Languages is being carried out through audio announcements on more than 2,400 Railway Stations across the country and Radio Spots on 167 FM & 91 Community Radio Stations (with message of Prime Minister), Bus Wraps on State Transport Buses across all States/UTs under ONORC, Outdoor Publicity and display of banners, posters, etc. at the FPSs. Extensive use of Social Media platforms – Twitter, YouTube, MyGov for public outreach.In-depth trainings and capacity building of district level officials, field functionaries and FPS dealers is also being carried out by the Department through VC and Webcasting.

The ONORC scheme is being implemented by the Department for the nation-wide portability of ration cards under National Food Security Act (NFSA). This system allows all NFSA beneficiaries, particularly migrant beneficiaries, to claim either full or part foodgrains from any Fair Price Shop (FPS) in the country through existing ration card with biometric/Aadhaar authentication in a seamless manner. The system also allows their family members back home, if any, to claim the balance foodgrains on same the ration card.