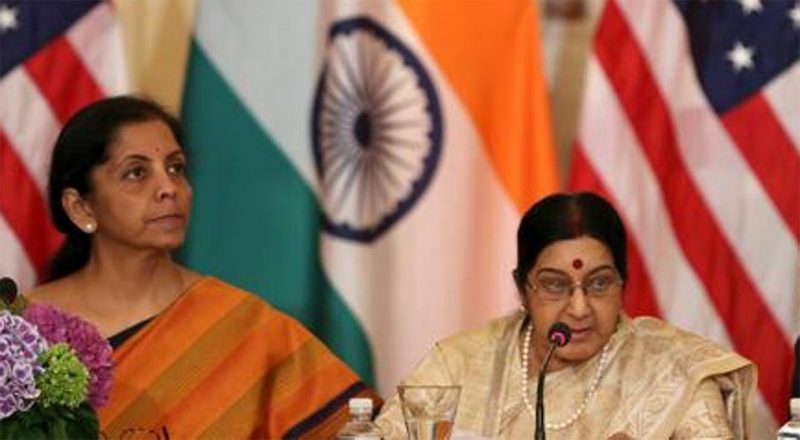 During the visit of Indian Foreign Minister Sushma Swaraj and Defence Minister Nirmala Sitharaman to America, the united states has announced that the inaugural “2+2” ministerial dialogue between its defence and state department secretaries and their Indian counterparts will take place in Washington on the expected dates.

The launch of the dialogue was announced in August last year. The White House had said in a statement, “Establishing a new 2-by-2 ministerial dialogue… will elevate their (the two countries’) strategic consultations.”

While secretaries Mattis and Tillerson have met their Indian counterparts Nirmala Sitharaman and Sushma Swaraj before, this will be the first meeting in a 2+2 (or 2 by 2) format of simultaneous meeting.

At the hearing, Sullivan spoke also of India’s involvement in Afghanistan in the context of President Trump’s south Asia strategy, which accords a larger role to India. “The United States and India share economic and humanitarian interests in Afghanistan,” he said. “India has allocated more than $3 billion in assistance to Afghanistan since 2001. India further strengthened ties with Afghanistan with the signing of a development partnership agreement. We appreciate these contributions and will continue to look for more ways to work with India to promote economic growth…”

“We expect to launch our inaugural 2+2 dialogue with India in Washington this spring, when Secretary (Rex) Tillerson and Secretary (James) Mattis will meet with their Indian counterparts to further deepen our security ties,” State Department Deputy Secretary John Sullivan said during a senate hearing on the Trump administration’s Afghanistan-centric South Asia strategy.