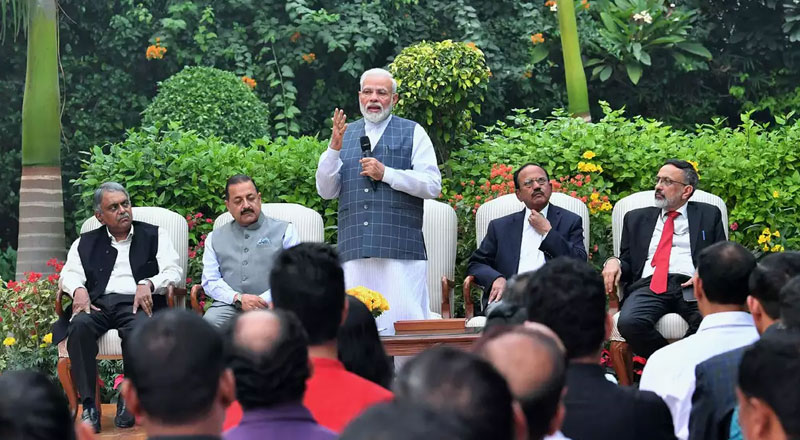 The Narendra Modi government has taken a few salient decisions a few weeks ago to reduce the effective levels of decision-making in the ministries and departments from five to three.

In the case of the Indian Administrative Service (IAS), an officer reaches the director’s position in the 12th year of service. In terms of their pay scale, they move from the Junior Administrative Grade to the Selection Grade. Along with it changes their entitlements with regard to housing and travel perquisites – directors are entitled to travel Executive class /AC I in trains and the daily allowance on tour is higher.

A batch usually gets empanelled as a Joint Secretary (JS) in the 16th year. Officers move into what is called the ‘Super Time’ scale. Here, they are entitled to business class for both domestic and international travel. Typically, a JS has a tenure of five years, and they constitute the ‘cutting edge’ of the government.

Although in smaller departments, files moved straight from the JS to the Secretary, in large departments like education, health, agriculture, commerce, and finance, the JS would normally submit the files to the Additional Secretary (AS). For decision levels in which the JS was the final authority, an endorsement at the level of AS was the norm, but in most cases, the file would go up to the Secretary.

As per the revised norms, on completion of three decades of service, a JS will be designated as an AS in situ, provided, of course, they are empanelled as AS or AS equivalent. However, both the JS and the AS will submit the files directly to the Secretary, and so, the Additional Secretary is now akin to a non-functional scale!

The AS will now be the first to get invited to the Rashtrapati Bhawan for the ‘at home’ on Independence Day and Republic Day. They also get to witness the Independence Day parade from the ramparts of the Red Fort. The tenure of the AS is not very long, and the current government is trying to empanel officers to the rank of Secretary soon thereafter to ensure that they get a longer tenure in that position. This is also necessitated by the fact that after 1995, the average entry-level age increased from 25 to 28 years.

Finally, when an officer becomes a Secretary to the Union government, they move to the apex scale in terms of pay and receive the status and treatment of a ‘state guest’ on an official visit to a state government, with all the attendant protocols besides an entitlement to use the reserved lounge at the airport.

So what is different now?

The reduction of two layers of decision-making in the government make a difference. Under the revised norms, each of the three levels will have a specific mandate.

In the first instance, the undersecretary or deputy secretary or director will initiate the note with basic information about the scheme/programme/issue in question. It will list the budgetary provisions, past precedents, references to related decisions as well as parliamentary assurances, if any, on the subject and recommend a course of action. At the level of the JS and AS, inputs from other divisions within the ministry, autonomous bodies, SPVs (Special Purpose Vehicles), PSUs (Public Sector Undertakings) and/or industry chambers will be factored.

In case the issue concerns more than one state, inputs from the state government are also taken on board. The file will now be put up to the Secretary who will take a 360-degree view and also look at the implications for the related ministries.

Well, this is a positive step in reducing hierarchy and making the government more functional. There is however a new irritant called ‘equivalent’, which has been institutionalised over the last few years. At the level of AS and Secretaries, an officer is now being empanelled as AS or AS equivalent, or Secretary and Secretary equivalent. More often than not, after a gap of six months to a year, those in the equivalent category are upgraded to the full status of AS or Secretary. A Secretary equivalent is not supposed to become the Secretary in charge, but in terms of ‘frills’, they are equal to the Secretary and get to be a state guest on their travel.