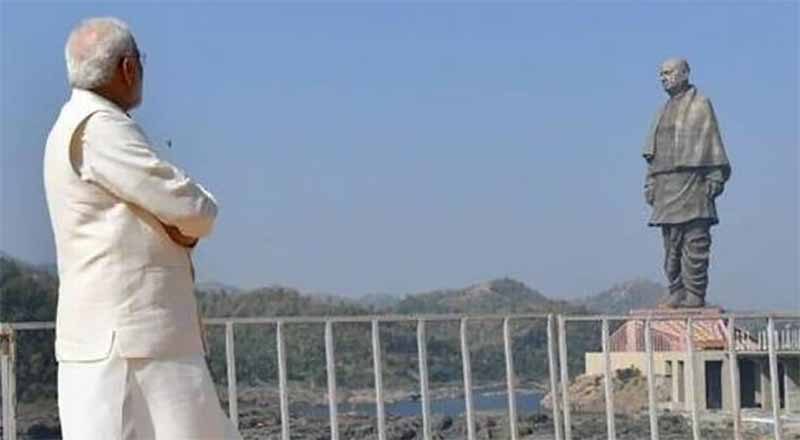 PM Modi has inaugurated the world’s tallest statue – Statue of Unity, on the occassion of the 143rd birth anniversary of Sardar Vallabhbhai Patel. The monument is located on the river island called Sadhu Bet facing the Narmada Dam near Rajpipla in Gujarat.

Built at a cost of Rs. 2,989 crore, eight years after proposing the ambitious project, the statue depicts Sardar Vallabhbhai Patel, India’s first Home Minister, wearing a traditional dhoti and shawl. Iron was collected from all over the country for the statue of Sardar Patel, also known as the Iron Man of India. At 182-metre, the statue is touted as the world’s tallest – it is 177 feet higher than China’s Spring Temple Buddha, currently the world’s tallest statue.

The statue has been designed by Padma Bhushan-winning sculptor Ram V Sutar and has been built by Larsen and Toubro and the state-run Sardar Sarovar Narmada Nigam. It took about 250 engineers and 3,400 labourers to construct the statue in 33 months.

The statue has a viewing gallery at the height of 193 metres from the sea level which can accommodate 200 visitors at a time. This gallery, at 153 metres height, will offer a view of the Sardar Sarovar Dam, its reservoir, and the Satpura and Vindhya mountain ranges.

PM Modi had done a virtual “abhishek” of the statue with the help of a lever. Also present at the venue are BJP chief Amit Shah; Gujarat Chief Minister Vijay Rupani; and Deputy CM Nitinbhai Patel. The guests were also presented with mementoes that were made of the same metal that was used to clad the statue.

The prime minister has performed a special prayer at the feet of the Statue of Unity and visited the museum and exhibition, and the viewers’ gallery.