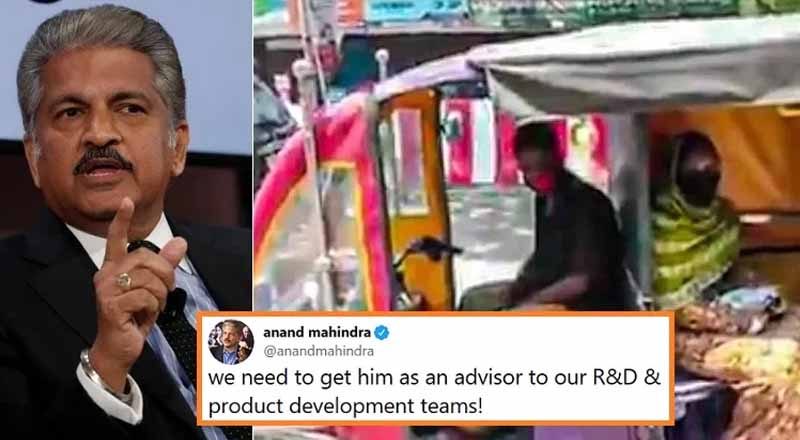 It is truly said that users experience is better than the general innovation. Recently a driver who drives e-rickshaw driver who modified his vehicle so that passengers don’t come in physical contact with each other.  Mahindra tweeted, tagging a company executive , that we need to get him as an advisor to our R&D and product development teams.

The driver says in the video, a man is heard calling the design “corona innovation”.

Anand Mahindra posted a video of an e-rickshaw driver who has compartmentalised his vehicle in a manner that no two passengers come in direct physical contact with each other. ‘The capabilities of our people to rapidly innovate and adapt to new circumstances never ceases to amaze me’, he tweeted

With the global pandemic is active across the globe, there is need to practice social distancing as a means to combat the deadly infection is being advocated by everyone around the world. Similarly, this e-rickshaw puller garnered the highest praise possible from Mahindra Group Chairman, Anand Mahindra for his innovative way of practicing social distancing while travelling.

The video, which stats with the video recorder terming the custom design of the battery run bike as “Corona innovation”, goes on to show how the owner of the vehicle has divided his e-rickshaw into four chambers for four passengers. His seat, or rather, the driver’s seat is also separated from the passenger area by a solid partition.

Anand Mahindra tweeted, “The capabilities of our people to rapidly innovate and adapt to new circumstances never ceases to amaze me.”

The chairman of Mahindra Group was quite pleased and impressed by the driver’s innovation and bestowed him the highest of the praises possible as he tagged Rajesh Jejurikar, the executive director – Auto and Farm Sectors, Mahindra & Mahindra Ltd, and asked him to hire the driver as an advisor to his R&D and product development teams.

Here is how the e-rickshaw has been customised by the owner: