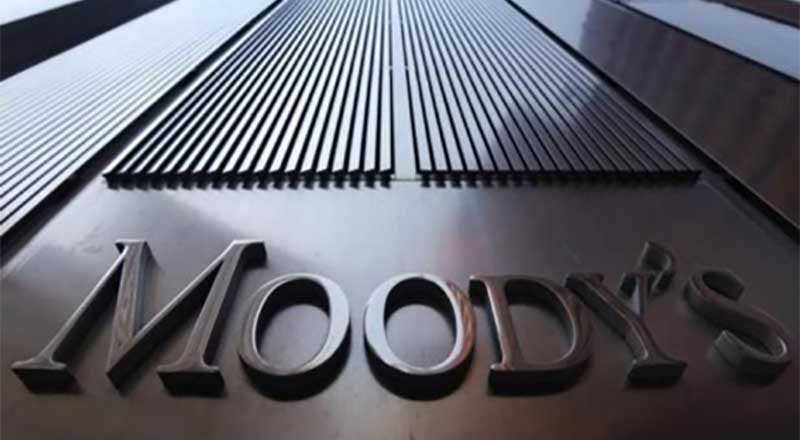 Moody’s Investors Service on Thursday slashed its 2019-20 GDP growth forecast for India to 5.8 per cent from 6.2 per cent earlier, saying the economy was experiencing a pronounced slowdown which is partly related to long-lasting factors.

The projection is lower than 6.1 per cent that the Reserve Bank of India (RBI) had forecast just last week. Moody’s attributed the deceleration to an investment-led slowdown that has broadened into consumption, driven by financial stress among rural households and weak job creation.

“The drivers of the deceleration are multiple, mainly domestic and in part long-lasting,” Moody’s said in a report. It expected the growth to pick up to 6.6 per cent in 2020-21 and to around 7 per cent over the medium term.

“Although we expect a moderate pick-up in real GDP growth and inflation in the next two years, we have revised down our projections for both. Compared with two years ago, the probability of sustained real GDP growth at or above 8 per cent has significantly diminished,” it said.

Last month, the Asian Development Bank and the Organisation of Economic Cooperation and Development lowered 2019-20 growth forecast for India by 50 basis points and 1.3 percentage points to 6.5 per cent and 5.9 per cent, respectively.

Last week, the RBI also slashed its growth projection for the economy to 6.1 per cent from an earlier estimate of 6.9 per cent.Rating agency Standard & Poor’s has also lowered its India growth forecast to 6.3 per cent from 7.1 per cent.

In June, Fitch cut India’s growth forecast for the current fiscal for a second time in a row to 6.6 per cent. It had earlier in March lowered the growth estimate for 2019-20 to 6.8 per cent, from 7 per cent projected earlier, on weak momentum of the economy.

Moody’s said the drivers of the deceleration are multiple, mainly domestic and in part long-lasting.

“What was an investment-led slowdown has broadened into consumption, driven by financial stress among rural households and weak job creation,” it said adding a credit crunch among non-bank financial institutions (NBFIs), major providers of retail loans in recent years, has compounded the problem.

“While we expect a moderate pick-up in real GDP growth and inflation over the next two years supported by monetary and fiscal stimulus, we have revised down our projections for both. We forecast real GDP growth to decline to 5.8 per cent in the current fiscal from 6.8 per cent in 2018-19, and to pick up to 6.6 per cent in 2020-21 and around 7 per cent over the medium term.”Moody’s expected a 0.4 percentage point slippage in the fiscal deficit target of the government to 3.7 per cent of the GDP in the current fiscal due to the corporate tax cut and lower nominal GDP growth.

“A prolonged period of slower nominal GDP growth not only constrains the scope for fiscal consolidation but also keeps the government debt burden higher for longer compared with our previous expectations,” it said.

It, however, saw “low probability” of a significant and rapid deterioration in fiscal strength, India’s main credit constraint, given the resilience to financing shocks offered by the composition of government debt.

India’s real GDP growth has declined in each of the past five quarters, falling to 5 per cent year-on-year in April-June 2019 from 8.1 per cent in January-March 2018.

“By international standards, 5 per cent real GDP growth remains relatively high, but it marks a low rate for India.

The government has estimated that the corporate tax cut will reduce revenue by around Rs 1.45 lakh crore or about 0.7 per cent of GDP in 2019-20.

“After factoring in exclusions for tax exemptions and the recent 0.3 per cent of GDP transfer of capital from the RBI, we expect a central government fiscal deficit of about 3.7 per cent of GDP in 2019-20, resulting in a slippage of 0.4 percentage points of GDP from the government’s target of 3.3 per cent,” Moody’s said.

As a result, the general government deficit, which at about 6.4 per cent in fiscal 2018 is already much larger than those of Baa-rated peers (median of 2.5 per cent), is likely to remain wider than Moody’s previously expected, it added.

Lastly, the rating agency attributed its decision to over six-year low economic growth at five per cent during the first quarter of the current financial year. Ind-Ra had estimated it to be 5.7 per cent earlier.