Prime Minister Narendra Modi on Monday gave a clarion call for a “global people’s movement” to bring about a behavioral change to deal with climate change as he made a path-breaking pledge to more than double India’s non-fossil fuel target to 450 gigawatts.

In his Independence Day speech, Modi had announced that India will produce 175 GW of non-fossil fuel as part of its commitment to the Paris Climate agreement.

Monday’s announcement during Modi’s speech at the global climate summit goes well beyond the pledge of 175 GW. It comes a day after Prime Minister Modi and US President Donald Trump shared the stage at a gala event in Houston on Sunday and displayed a close friendship and a common vision on fighting terrorism.

But the US and India differ on the issue of climate change. Trump withdrew from the Paris climate deal in 2017 and blamed India and China for his decision, saying the agreement was unfair as it would have made the US pay for nations which benefited the most from the deal.

“We must accept that if we have to overcome a serious challenge like climate change, then what we are doing at the moment is just not enough,” Modi told world leaders at the summit organised by UN Secretary General Antonio Guterres here.

In his first engagement at the United Nations, Modi noted that various efforts are being made by different countries to fight climate change and said what is needed today is a comprehensive approach which covers everything from education to values, and from lifestyle to developmental philosophy.

“The time for talking is over. The world needs to act now,” Modi asserted in the presence of President Trump, who made an unscheduled appearance at UN summit. Trump listened to Modi and German Chancellor Angela Merkel’s speeches and left without saying anything.

Modi said India would increase the share of non-fossil fuel and by 2022 “we will increase our renewable energy capacity to much beyond 175 GW and we are committed to take it further to 450 GW.”

“Need, not Greed has been our guiding principle,” Modi said.

The Climate Action Summit aims to boost action to implement the Paris Agreement, which was signed in 2015.

The Paris deal aims to strengthen the global response to the threat of climate change by keeping a global temperature rise this century well below 2 degrees Celsius above pre-industrial levels and to pursue efforts to limit the temperature increase even further to 1.5 degrees Celsius.

“What we need is a global people’s movement to bring about behavioural change,” the Prime Minister said.

“The respect for nature, the judicious use of resources, reducing our needs and living within our means have all been important aspects of both our traditions and present day efforts. And therefore India today has come not just to talk about the seriousness of this issue, but to present a practical approach and a roadmap,” he added.

“We believe that an ounce of practice is worth more than a ton of preaching,” he said.

“In India we have made plans to make our transport sector green through e-mobility. India is also working to considerably increase the proportion of the biofuel blend in petrol and diesel,” Modi said.

A recent study has found that India and China, which faced the highest burden of death from air pollution, will reap the biggest health benefits of a robust climate policy aimed at reducing carbon emissions.

The benefits could reach trillions of dollars in value annually, depending on air quality policies that nations adopt, according to the research by the University of Vermont and published in the journal ‘Nature Communications.’

Modi said India is also focusing on the use of compressed bio gas and his government has provided clean cooking gas to 150 million families, thus improving the health of the environment, of women and children.

Talking about his government’s ambitious ‘Jal Jeevan Mission’ for water conservation, rainwater harvesting and for the development of water resources, Modi said India will spend USD 50 billion on the project in the next few years.

Modi said India and Sweden will together launch the Leadership group within the Industry transition track.

“This initiative will provide a platform for governments and the private sector with opportunities for cooperation in the area of technology innovation. This will help to develop low carbon pathways for industry,” he added.

He also said India would launch a Coalition for Disaster Resilient Infrastructure to make its infrastructure disaster resilient and invited UN member states to join this grouping.

He said India will inaugurate on Tuesday solar panels on the roof of the UN building, built at a cost of USD 1 million.

“We hope projects such as this one will inspire all of us to take the protection of our environment to new heights,” he added. 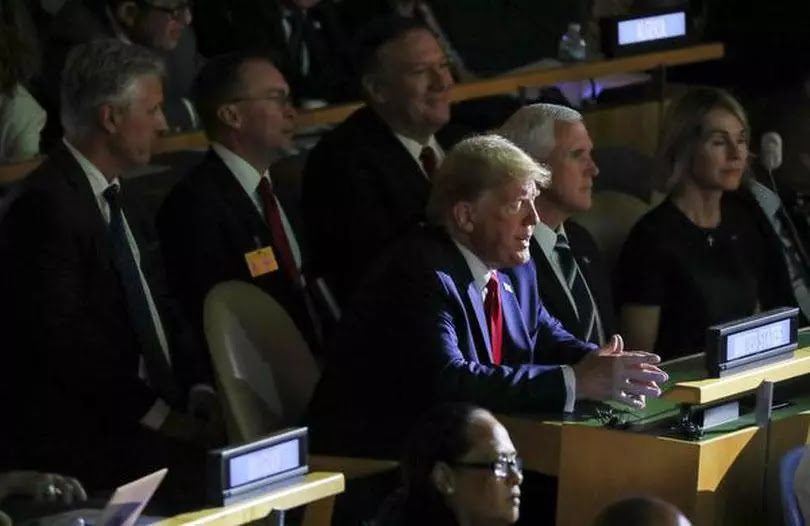 Trump was not scheduled to attend the summit. The president listened intently for about 10 minutes before departing for his religious freedom event.

He also attended German Chancellor Angela Merkel’s speech and left without saying anything.

The climate summit is part of the United Nations General Assembly and was planned to “discuss a leap in collective national ambition.”

Trump has repeatedly expressed doubt about the overwhelming scientific consensus on manmade causes of global warming.