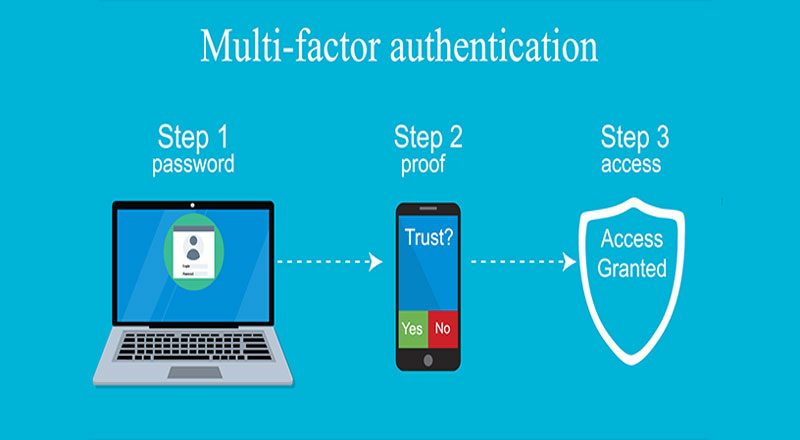 Technology has come a long way in improving the way people do almost everything, maybe for a shorter time ,since another technology is getting ready to disrupt the existing one. The risk of being hacked or targeted online is higher than ever, as cybercriminals are constantly trying to get their hands onto your data. Security breaches are increasing every year. Hackers get smarter as they become more familiar with the loopholes in basic account security structure. To protect both you and your consumers, it’s essential to implement changes in the way you store and access your data. Multi-factor authentication (MFA) refers to the use of several log-in credentials for a user to access his or her account. This is different from two-factor authentication (2FA) in the sense that it uses more than two log-in credentials.

A range of authentication techniques have a range of strengths, the strongest having more than one factors and resistance to social engineering. Instead of just asking for a username and password, MFA requires you to enter a code from a secure generator, answer a security question, or even biometric information such as your fingerprint or facial pattern. Successfully defending enterprise systems and data is often said to be a balance between security and convenience. The most recent Verizon Data Breach Investigations Report found authentication hacks rife among attack techniques. In 45% of incidents, attackers employed some form of authentication hack. That includes targeting passwords through brute force attacks—the most cited type of attack. In fact, credentials were exploited in 37 % of attacks. Credential-based attacks far out-shadowed malware, which was used in 17 % of attacks.

Secondly, the multifactor authentication market is booming. One of the most effective ways to defend the authentication process is to increase the number of factors required for a successful login. Think of each factor as an additional validation check.

A significant tailwind to multifactor authentication sales is the dramatic shift to working from home. Remote working has provided attackers with ample opportunity. And because remote employees will likely be accessing applications from their home networks, they also lack sophisticated enterprise defenses such as intrusion detection and prevention systems, anomaly detection, and web content controls, so their systems are more susceptible to attacks. Perhaps the biggest threats are phishing attacks that attempt to obtain usernames and passwords.