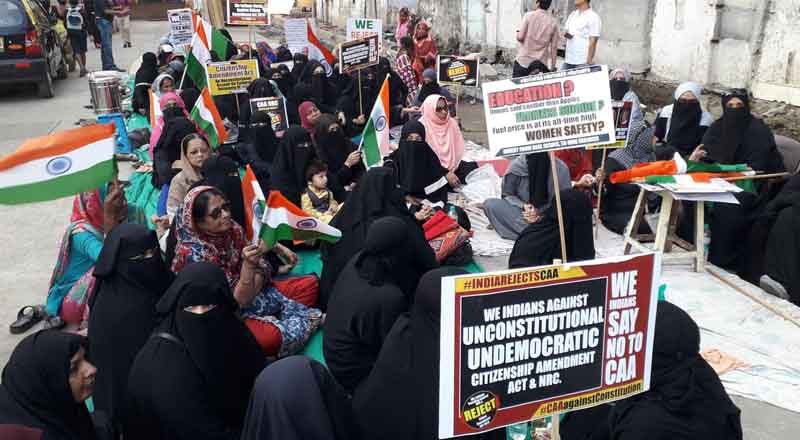 The heat of the protests against CAA and NRC can be felt in South Mumbai’s Nagpada area where a group of housewives and young students squatting on a road showed no signs of fatigue, as they spiritedly raised slogans opposing the new citizenship law while hailing the Hindu-Muslim unity in the country.

At least 100 women, who have been sitting on a side road in Nagpada area since January 26 night against the CAA, NRC, NPR regime, on Tuesday vowed to hold their ground like their Shaheen Bagh counterparts in Delhi.

Most of the women are residents of Madanpura, Jhoola Maidan, Agripada and Mumbai Central areas. Feroze Mithiborwala of ‘Hum Bharat Ke Log’ said that the women are firm to continue with their protests.

“Women from the Muslim community have been feeling frustrated since the last six years. It is for this frustration that women are coming out to protest,” Mithiborwala said.

“If anyone visits your home asking for your documents, then respond by demanding Rs 15 lakh from them,” Siddique said in an apparent reference to the BJP’s pre-2014 poll promise.

One of the protesters said the women are balancing their responsibilities at home while also participating in the protest.

They go to their respective homes in batches and return to the spot after dropping their children at school and completing other work, she said.

The local police is trying hard to break the protest, but all in vain.