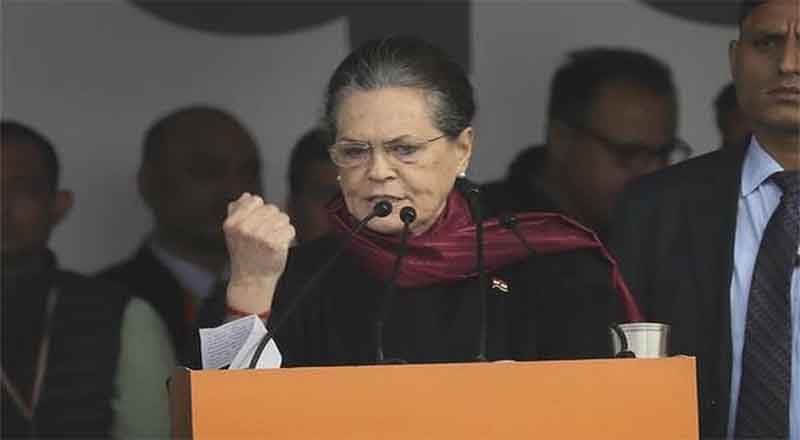 With more than 10,000 confirmed cases of coronavirus in India, including 8,988 active cases, 1035 cured and 339 deaths. Sonia Gandhi speaks over a video message, “Today when the country is fighting such a huge battle, I want to assure you all that whether the Congress is in government or is in opposition, it is with you in this fight against Covid-19 pandemic and she appeals everyone to stay indoors, follow social-distancing.

Just Hours before Prime Minister Narendra Modi’s address to the nation on Tuesday, Congress president Sonia Gandhi released a video message in which she said that her party is with the people of the country in the fight against the coronavirus outbreak.

In a video message, Gandhi said, “Today when the country is fighting such a huge battle, I want to assure you all that whether the Congress is in government or is in opposition, it is with you in this fight. I have firm belief that with great determination we will soon come out of the tragedy.”

Appealing people to stay inside their house and follow the social distancing norms, the Congress leader also praised those on the forefront in the fight against Covid-19 pandemic – sanitation workers, policemen and doctors.

“What can be more patriotic than participating in this fight. We will never forget the sacrifices you and your family have made. Despite risks, you are fighting the battle from the frontlines. We lack safeguard mechanisms for you, but you are still helping us in the fight. Police, doctors, sanitation workers all are doing their bits,” said Gandhi.

The Congress chief sought to assure people of her party’s support in fighting the anti-corona battle. “I assure you that whether the Congress party is in power or in opposition, we will stand by you anywhere in this battle. I am confident that, with a high morale, we will emerge from this crisis very soon. You stay at home and be safe,” she said in her message.

Gandhi said that despite the shortage of personal protective equipment, our warriors including doctors, health workers and NGO’s are working hard , day and night to help fight this battle and win over it. “This fight will weaken without your support, and we should not allow this to happen,” she said.

Sonia said, at some place, she had heard reports on ill-treatment meted out to doctors. This is wrong. Our culture and tradition does not allow this and we should support them, she further added.