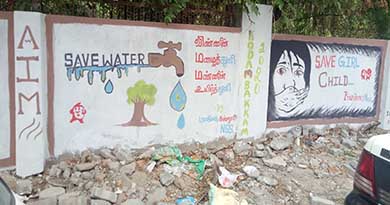 Nippon Paint India (Decorative Division) completed its painting initiative with AIM (Awareness India Movement) to give the neighbourhood of Kodambakkam a makeover. The event which was part of AIM’s project #Kodambakkam2020, saw student volunteers from various city colleges offer their support to the initiative.

Launched by AIM, project #Kodambakkam2020 was initiated with the support of the Greater Chennai Corporation. It began on 26th of January 2018, under the theme “Namathu Theru, Namathu Porappu and has successfully beautified areas in and around the neighborhood. Close to 115 college volunteers attended the event and painted select walls of the locality. Nippon Paint provided Paints and other protective gears for volunteers to undertake the project.

Speaking about the initiative, S Mahesh Anand, President – Decorative Paint, Nippon Paint India commented “We at Nippon Paint have always believed in promoting the need for a clean neighbourhood. We are delighted to join hands with AIM to contribute to the Swachh Bharat Mission 2018. We feel privileged to be able to contribute to this cause and are glad that members of the Television fraternity have offered their support for the initiative. We are certain that this will go on to encourage people to realise the importance of environment conservation”.

Speaking further about the association Vetrivel, President- AIM Chennai said, “AIM is proud to partner with Nippon Paint to beautify various Chennai neighbourhoods. This initiative will urge youngsters to strive towards establishing a clean surrounding. We are very grateful to all the student volunteers for extending their services and joining us in spreading awareness on environment conservation”.

Following the success of #Kodambakkam2020, AIM has now planned to initiate similar events in other neighbourhoods, to promote cleanliness in the city.