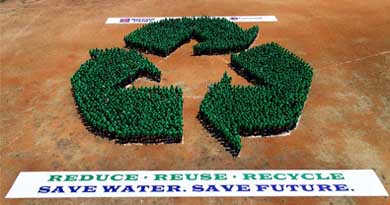 Nippon Paint (India) has received the Guinness World record for forming the largest human recycling logo, consisting of 1726 people. The occasion was marked at an Award Ceremony at Radisson Blu, Egmore on June 5, 2018 – that commemorates the conclave on World Environment Day.

The record attempt was the initiative of “Nippon Paint India” in association with B.S Abdur Rahman Crescent Institute of Science and Technology and The New Indian Express to create awareness on the 3R’s of Water conservation message (Reduce, Recycle, Reuse) on the occasion of World Water Day – March 22, 2018. It was carefully scrutinized by the Guinness board following their standardized procedures, before being handed the record title.

Talking about the record, S Mahesh Anand, President – Nippon Paint (India) Private Limited (Decorative Division) commented, “At Nippon Paint, we have always believed in voicing our strongest support for environment conservation. And what better way to do that than attempting to achieve a Guinness record. The win comes at a perfect timing, as we celebrate World Environment Day today and we hope this will create awareness for the importance of our message – Reduce, Recycle, Reuse.”

The Record was attempted on March 19, 2018 with the help of 1,726 people (students and staff of the University) at B.S. Abdur Rahman Crescent Institute and the entire sequence of activity three hours to complete. Everyone was given a green T-shirt and cap to wear, so that that the logo appeared as a block colour when viewed from above, which created some impressive aerial photos. The final design measured 45ft by 75ft, beating the existing record set by Mersin Büyükşehir Belediyesi in Mersin Cumhuriyet Square, Mersin, Turkey, on 7 June 2017, which had 751 participants.