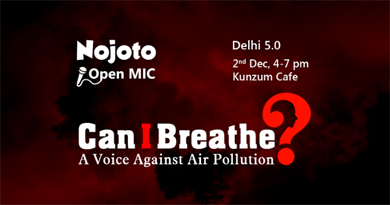 Seeing the alarming levels of air pollution globally and its worsening impact on Delhi-NCR specifically, has compelled Nojoto, an Interest Based Network, a Media-Tech startup based out of Gurgaon to launch an awareness campaign on the burning issue.

“Can I Breathe” is a Voice Against Air Pollution, is communities of different talents coming together such as poets, writers, photographers, storytellers, comedians, theatre artists, who, with their creative expressions, acts and performances, are sure to get the nation thinking about the grave concern and its consequences.

Joining the movement in this initiative is lateral sutra, an integrated marketing-communication outfit, which is driven to promote causes with social concern.

Talking about the campaign, Satyaprem Upadhyay, Co-Founder, Nojoto, says, “The solution to the concern ‘Air-Pollution’ is not just speeches / panel discussions, but one – to spread awareness on the subject and second, to change the mindset through easy dialogue and fresh perspectives. With this campaign, we aim to create an innovative and engaging platform for Poets, Writers, Stand-up Comedians, Photographers, Theatre Artists, etc, who will come forward to share their approach to the matter, in a form that is conducive to bring about a change.”

Elaborating about their association with the campaign, Mamta Dhingra, Founder, lateral sutra says, “At lateral sutra we believe in spreading awareness, striking meaningful conversations and bringing about a change on issues of social cause and concern. Our approach is dialogue and knowledge sharing. In this light, “Can I Breathe?” is a campaign of huge relevance to us. Associating with Nojoto is in line with our philosophy and commitment to work towards communities and society at large and we are delighted to be a part of this endeavour!”

The campaign was launched on 26th November at Stirring Minds from 4 to 8 pm, and saw 100+ poets and writers joinng it, which was hosted by Anil Singhania, a famous poet of North India, who spoke about air pollution:

In India, 2nd December is annually observed as National Pollution Control Day in memory and honour of the people who lost their lives in the Bhopal Gas tragedy. Pollution level in Delhi, as per recent reports, is equivalent to smoking 44 cigarettes a day.

On this 2nd December, “Can I Breathe?” A Voice Against Air Pollution, is kick-starting a series of online and offline activities, which are devised to raise awareness, create a dialogue and chart a way forward on the subject.