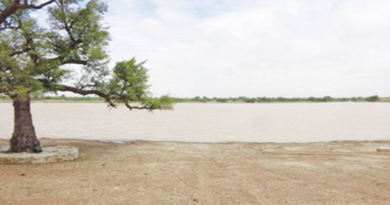 India has a long history of people’s involvement in rainwater harvesting to meet local needs, especially for drinking purposes and farming. The country has a unique climate with intense monsoon for some weeks followed by a long stretch of dry weather. Provincial rulers and chieftains, together with local craftsmen and villagers ingeniously set up tanks/ponds that served as traditional rainwater harvesting structures. These tanks/ponds were earthen-bunded reservoirs built to take advantage of the natural depressions in the terrain. Tanks/ponds have been the most important source of irrigation, for recharging ground water, offering sanctuary to birds, for domestic use and a source of drinking water for both people and animals.

Rationale of the project

Nadi, a traditional water harvesting structure in western Rajasthan is excavated or embanked to collect precipitation, to mitigate the scarcity of drinking water in the lean period i.e., early spring through the summer months. Rainwater collected in the Nadi from the runoff is available for periods of four months to a year after the rains, depending on the catchment characteristics, the amount of rainfall received and its intensity. This is an ancient practice and the Nadis are the most important water sources of the region used for drinking purposes by human beings as well as livestock.

Bhap Nadi is a traditional water storage tank in the village/ Gram Panchayat Bandra in Block / district Barmer of western Rajasthan. It was built in the 1960s by the local villagers for drinking water to survive in the extreme climate of the Thar Desert region. However, in due course of time, this Nadi got silted up and the water storage capacity was reduced to a large extent. This Nadi had practically dried up before the summer of 2015 as there was a drought-like situation during 2014.

The local Gram Panchayat representatives and the community approached the team members of the Barmer Unnati project for help. Barmer Unnati is a Local Economic Development project being supported by CAIRN India under its CSR (Corporate Social Responsibility) initiatives in Barmer district, Rajasthan, and is being implemented by TechnoServe India, a development organization, since September 2013. The Barmer Unnati project includes Natural Resources Management (NRM) as one of the significant project activities. In response to the request from the villagers, the technical team fromthe TechnoServe project office at Barmer visited the site along with people from the local community.

During the feasibility study on the existing structure during December 2014, it was found that due to lack of maintenance, the structure had almost silted up, the embankment was ruined and unwanted trees and bushes had sprouted on the banks of the Nadi. The little water retained in the Nadiwas muddy and black in colour and was not even suitable for animals grazing in the vicinity.Yet, people from the nearby villages were still busy filling their tankers to store water for drinking purposes as the summer was fast approaching.In discussions with the community, it was found that about 5000 households from seven Gram Panchayats depend on this particular Nadi for drinking water throughout the year, as well as water for their livestock.

A community meeting was held on December 12, 2014 at the Nadi site which representatives from all nearby villages and members of the Gram Panchayat attended, and a collective action plan was chalked out. Emphasizing community participation and contribution, it was decided that the community would support bank cleaning, bush removal, dressing the embankment after earth filling both manually and by using machinery, which amounted to around 20 percent of the expenditure and the balance 80 percent funding would be provided by the Barmer Unnati project towards excavation and embankment formation using machines. A Nadi development and management committee was formed with 25 representatives drawn from all the villages, to monitor and support the renovation work, and subsequently manage the future maintenance of the Nadi.

During February 2015, the renovation work started with the active participation of the community.

In this excavation/ renovation work, one Excavator with five tractors and one tractor leveller was engaged for about 45 days at different stages and time spans and the renovation work was completed by June 2015, before the onset of the monsoon. In the course of this activity, the project team supported by community participation were able to remove the silt, clay and mud from the storage area and strengthen the embankment completely.

During the last week of June and last week of July, only two spells of rain occurred in Barmer, and the entire runoff from the catchment got collected in the Nadi structure from these two rains. Though there was limited rainfall in the monsoon season of 2015, the Nadi was able to store the rainwater over a pond area of 4 hectares to an average depth of 3 metres and achieved an approximate volume of 120000 cubic metres (1200 lakh litres).

According to the villagers, this clean rainwater is sufficient for the drinking needs of about 5000 households and their domestic animals at least for the next two years, even if there is no rainfall over the two years. Currently, the nineteen villages in seven Gram Panchayats in the vicinity of the structure are securewith respect to drinking water. The management committee is looking after the cleanliness and maintenance of the structure by imposing certain rules such as disallowing water to be taken by contractors for construction purpose, and no bathing and washing in the Nadi.

The people around the Nadi structure are elated to get clean rainwater and saving of about Rs.5000 to Rs.10000 per household per year by not having to purchase water from other sources. Bhap Nadi has once again proved its central role in the life of the local community with the assurance of drinking water security in the arid Thar Desert region.