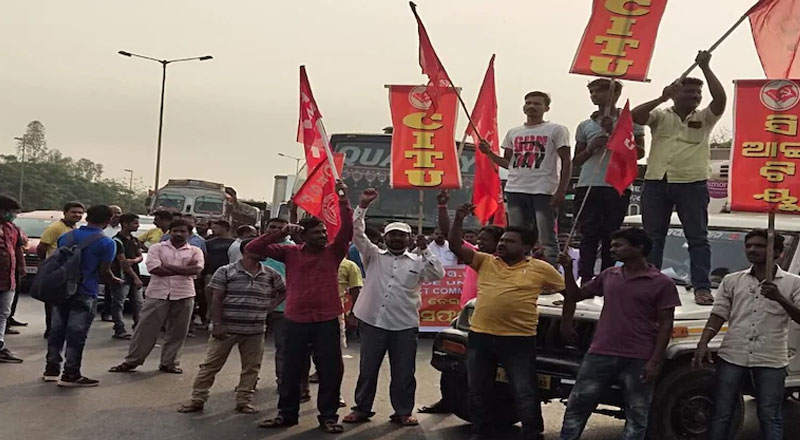 The normal life in Odisha witnessed disruptions on the first day of the two-day nationwide strike called by the joint platform of central trade unions and bank employees’ forum.

The normal life in Odisha witnessed disruptions as the strike began.

At around 6:00 am on Monday, different trade union leaders started reaching Bhubaneswar Railway Station and staged a blockade protesting the privatisation of government-owned companies, price rises and other central government policies.

Two trains were blocked by the protesters at the railway station, while the movement of buses was also halted from the Baramunda bus stand.

Holding placards and banners, members of the trade unions spread across various points of the city and staged road blockades.

Furthermore, hundreds of vehicles, including trucks and passenger buses remained stranded on both sides of the National Highway near Acharya Vihar flyover, which is the connecting point from the Kolkata to Chennai route, as the agitators blocked the road.

Similar incidents of normal life being disrupted due to picketing by agitators in the other districts of the state, including Balasore, Cuttack, Berhampur, Sambalpur and Rourkela were reported.

Besides this, banking, insurance, income tax, postal, telecom, power, oil, steel, coal and copper sectors in the state were also hit as the bank unions joined the protests after the All India Bank Employees Association announced the plan to lend its support to the nationwide strike.

In this regard, the State Bank of India (SBI) has already issued a statement stating that banking services may be affected on March 28 and 29.

Informal workers in sectors like farming extended their support for the nationwide protest in rural parts.