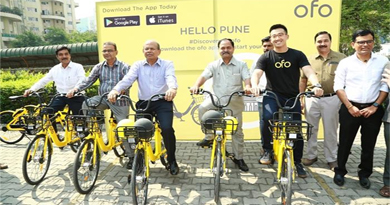 ofo has announced its first area-level operation in Pune by launching its services in the township of Magarpatta. The launch comes two months after the bicycle-sharing company signed MoUs with the Pune Municipal Corporation (PMC) and Smart City Pune to support their ambitious Pune Cycle Plan.

Following the completion of its pilot-phase in some of the city’s closed campuses, the dock less bicycle-sharing platform operated via mobile app, has begun rolling out its signature yellow bicycles at key locations in the mixed-use township of Magarpatta, spanning an area of over 600 acres. The launch is in line with ofo’s commitment to support Pune’s efforts to become bicycle-friendly again and reclaim the ‘city of cycles’ tag.

Welcoming ofo to the city at the launch event, Satish Magar, MD, Magarpatta City said, “We walk to school, we walk to work, we walk to shop but we never thought that we will cycle to work. I thank ofo and Pune Smart City for this initiative.” Also present at the launch, Rajendra Jagtap, CEO, Pune Smart City added, “Non-motorised mode of transportation such as bicycles should be adopted for short distances and we should make it an integral part of our life to address last mile connectivity.”

Dexter Sim, Expansion Manager, ofo, APAC said, “ofo’s bicycle-sharing model came from five students at the Peking University to tackle the problem of short-distance travel around the campus. Our focus is to provide a sustainable solution for last mile commute that will not only help check pollution but also reduce traffic congestion in expanding cities like Pune.”

Rajarshi Sahai, Director of Public Policy & Communications, ofo shared, “We are thrilled to bring ofo’s flexible bicycle sharing service to Magarpatta with our easy-to-use, safe and affordable riding experience. We have been working with PMC, Pune Smart City and other government bodies, planners, and residents to ensure that our services complement the cycling infrastructure that forms an integral part of the Pune Cycle Plan.”